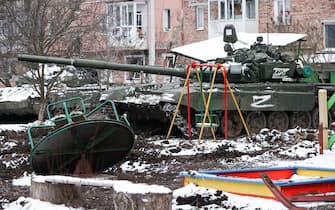 Twelve Russian generals they would have been killed by Ukrainian forces. This is what Kiev sources say. The numbers are high and unusual: rarely in past conflicts have so many high military ranks fallen in a short time. The intelligence services of the United States would also have helped the Kiev forces to strike important positions in the Russian army. To report it is the New York Times

WATCH THE VIDEO: Ukraine, USA at the UN: “There is evidence of mass graves in Bucha”

VITALY GERASIMOV – Among the generals killed in the war – as reported by various international media including CNN – there would also be Vitaly Gerasimov, deputy commander of the 41st Army of the Central Military District. In the past he had participated in military operations in Chechnya, Syria and Crimea

MAGOMED TUSHAYEV – Another general who was allegedly killed by the Kiev soldiers is Magomed Tushayev, commander of the 141st Rosguard motorized regiment, very close to the head of the Republic of Chechnya, Ramzan Kadyrov. The Chechen media denied Tushayev’s death

Why so many Russian generals are dying in Ukraine

ANDREY KOLESNIKOV – According to the Ukrainian news media in March, General Andrey Kolesnikov – commander of the 29th Army of the Eastern Military District – also died in Ukraine

ANDRIY SUKHOVETSKY – Confirmed the death of General Andriy Sukhovestky, deputy commander of the Central Military District, killed a few days after the start of the war in Hostomel, near Kiev. During his career she had participated in Russian operations in Syria and Crimea. His killing had also been reported by the Russian newspaper Pravda.ru

Ukraine, Russian frigate hit by a Kiev rocket goes up in flames

OLEG MITYAEV – The fighters of the Azov battalion, the Ukrainian military group that Putin defines as a “neo-Nazi”, allegedly killed Oleg Mityaev, commander of the 150th Division of Motor Rifles, near Mariupol, as reported by several international sources, including Newsweek

YAKOV REZANTSEV – General Yakov Rezantsev was also reportedly killed near Kherson. This was announced there Bbcciting the Ukrainian Ministry of Defense

VLADIMIR FROLOV – The deputy commander of the 8th Army, Vladimir Frolov, was reportedly killed between 11 and 17 April. His death was confirmed by the press office of the mayor of St. Petersburg, where the funeral was held (in the photo, the tomb of Frolov)

ANTON SIMONOV – The last general Kiev claimed to have killed is Moscow’s electronic warfare specialist Anton Simonov. This was announced live on YouTube by Alexey Arestovych, Zelensky’s adviser. Simonov was reportedly killed during an assault on Russian soldiers in which the Ukrainian Defense said it destroyed 30 armored vehicles