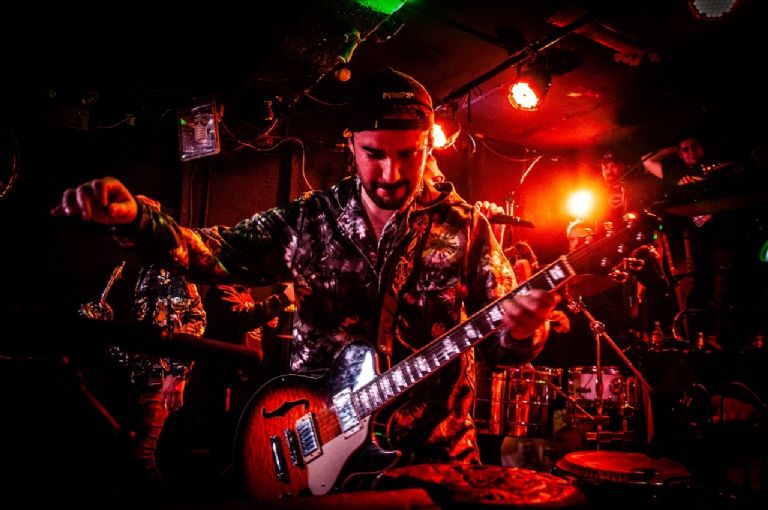 In 2006 they got together ‘carting’, like a game. Making a band is not the dream of few, however, in 2016 and despite the natural apprehensions Santa Fe celebrated its 10 years at the Movistar Arena, being one of the few national bands that can fill this stage. With his freshly released LP from Doing nothing warm under the arm, Santa Fe It was already the atomic and consecrated band that would continue unstoppable, like a force of nature, until today.

Shortly after, in 2017 the album came out In the eye of the hurricane where did he appear The gil of your experhaps one of the most distinguished creations of Santa Fewhich would once again touch the hearts of the fans of the cumbiero movement, in addition to the notable collaborations with other immense figures of Chilean music such as Illapu Y Spokesman.

A year later Santa Fe is reconsecrated in Olmué Huaso Festivalbeing the first time they appear on open TV, but it is their trip to Los Angeles, California, where they recorded the cover of red red wine Y someday you will come backanother of the emblematic themes of “homemade cumbia”, which crowns 2018 as a round year.

Despite the interstellar rise of the danceable hurricane, having been in Olmué the previous year and being the most listened to band in Spotifyfor 2019 they had not yet been considered to decorate the vine Festival. However, by December they had shown that they did not need the Festival or the traditional channels to fill the Quinta Vergaraa feat that they repeated on April 30, 2022 to make a live album that is now available on the streaming music platform.

In addition, this year they also released the singles “My Dead”, “It happened to me” and the most recent: “It hurts”. According to me: a real gem.

In my opinion, to Santa Fe he is loved, respected and is going to be seen whenever possible, like Cecilia, Juan Anonio Labra, Los Jaivas, Los Búnkers, Les Miserables, Los Tres, Los Prisioneros, Pablo Chill-E, to name a few. .

I have been lucky enough to see them in various cities (Valpo, Quilpué, Santiago, Yungay) at festivals, theaters, bars, demonstrations and protests to name a few, and I can only say that “Like Gilda, I do not regret this love.”

The afternoon of August 11 my friend Nick Calaveras tells me that Santa Fe will be in La Maestra Vida. In my ears it was like putting together humitas with sugar and tomato: an explosion of happiness. Went.

We arrived before the last show started on the last of the 3 nights (Aug 9, 10 and 11) that they performed. As expected, it was packed. 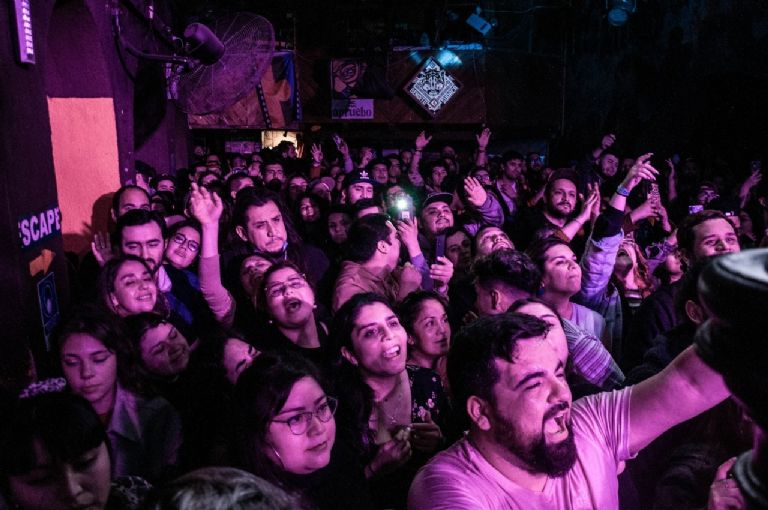 With luck and some cunning I managed to get close to the stairs of the room on the left. The second step allowed me a beautiful panoramic view at ¾ of the stage, since I lost the extreme left as a result of perspective and distance.

That was my main enthusiasm: it’s been a long time since I’ve seen Santa Fe so closely and, I don’t know about you, but it happens to me that seeing them, I feel that they project good vibes, belonging, confidence, happiness. Seeing them is a riot of joy and joy is not exactly in abundance.

To my surprise, the Show began with “Chicken” featuring Marjorie Ceronbetter known as “The violinist mom”.

From the existence of Marjorie I found out at the Movistar Arena since she was the winner of the “Street Artist” contest whose award ceremony took place on July 16 at La Gran Noche de La Corazón. Her story moved the attendees and she excelled playing Loca by Chico Trujillo. That same night Santa Fe closed the show and it did not seem unreasonable to imagine that they met at that event.

That is the type of gestures that make one “soft heart” and the public did the trick, singing the songs he performed Marjorie with passion and tenderness. Until the hurricane warning sounded.

The first chords are heard: in a second the hairs on my arms stand on end, the muscles tense, the fists close, the index finger and thumb stretch out like a pistol, the knees bend a little and in no time I’m in position of cumbia.

passed How it hurts, The gil of your ex, let’s go to the boti, I sing to the difference, I bring you cumbia, Take one out, Madness and passion. The wet back, the pants stuck to the body, the eyes closed. The Master sings: 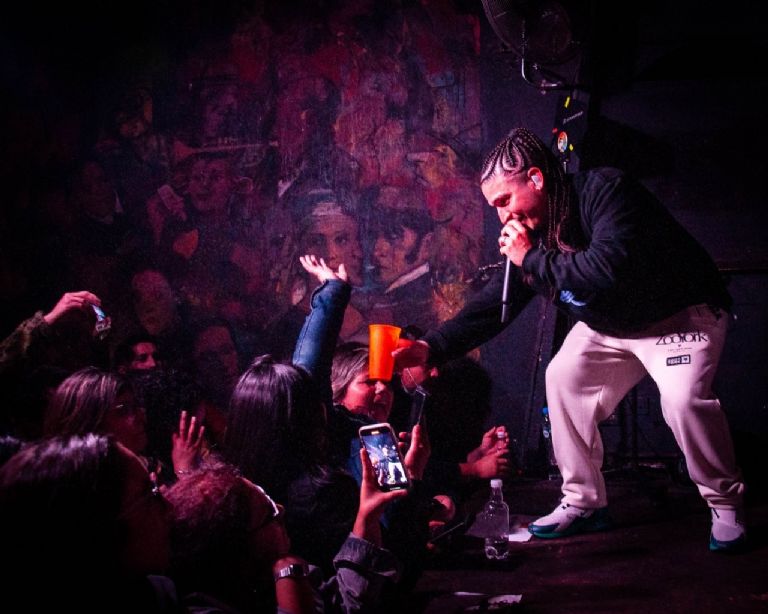 Suddenly and across the room appears the face of an actor friend who was also in the house. I went there to say hello. I took the whole song”Doing nothing” in crossing the few meters wide of the space that contains the stage. Nice to meet again after so long in the heat of Santa Fe. Dancing.

Suddenly I saw Nick standing on the ladder leading up to the stage. From a distance he beckoned me to occupy the space on a step that, with affection, he took care to reserve.

The last 5 songs I practically spent on stage with the band, in a situation of cosmic privilege and I understood everything: The show is not pure show.

These people really love each other. It is real that complicity vibrates in each note. They operate as a team that knows each other so well that they are able to anticipate the other in that dedication that occurs between people who go to battle and become brothers.

In that trance I saw brunette hope where a foreman magically appeared that the Bafochi already wanted. He was also a member of the team, of course, but his participation seemed more spontaneous than prepared. 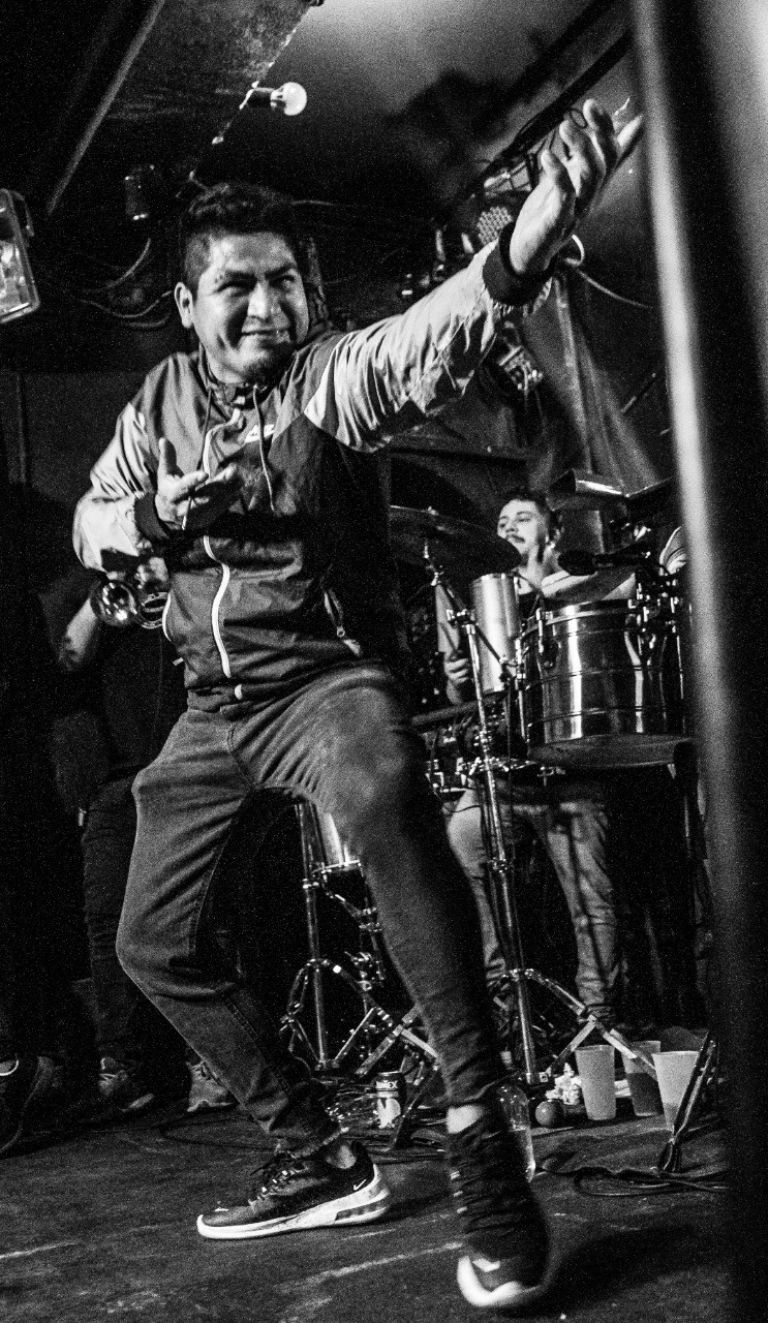 Watching them work up close was like looking at a good soccer team, on one side of the field: they make you want to play, even if you don’t even hit the stones.

Without wanting to venture a generalization or have a truth, I think it is no coincidence that the band’s first hit was sakate 1. Santa Fe he does not take the poto out of the syringe with his lyrics and they go to the clash in terms of social problems, health, education, marijuana use, spite, passion. They sing as they speak and speak as one. They have not disguised the success they are reaping and despite that, the lights and the big stages, they maintain that essence of a family project, close, that is loved and cared for, because in addition to having a good time, it is the source of work and that is respected.

But it’s not just that. It also has something to do with what they project. Every time I had the fortune to see them I was left with the same feeling of “full heart”; of recharged batteries, of rest even after having danced like hell. But that euphoria is not only mine since the good vibes invade even the exterior of the spaces in which they are presented, where people go out exchanging presents, kisses and laughter.

However, there is another thing. Perhaps it has to do with being able to interpret the feelings of a generation that has lived through interesting times, but that does not have the tools to deconstruct what it has learned and Santa Fe it offers an experience of catharsis, a salvation from the suffocation caused by individualism and gives us common codes.

Santa Fe it’s so popular that it has become something that unites us and that is revolutionary.

But also, it happens that with Santa Fe one can dance with the complete confidence that no one is going to see you making a fool of yourself and even losing your dignity in a passionate song, since when observing the public, the vast majority find themselves in the same trance: singing as if each one were the who is on stage, jumping next to the Chickena Yo-yoa mauro, Ariel, richie and the rest of the crew.

Once the show was over, with closed applause they went up to the Backstage.

In a surreal move and once again thanks to Nick, I was able to climb up as well and participate for a moment in the wonderful intimacy of shared congratulations. At the exit, as a souvenir, they gave me the list of the songs they played. 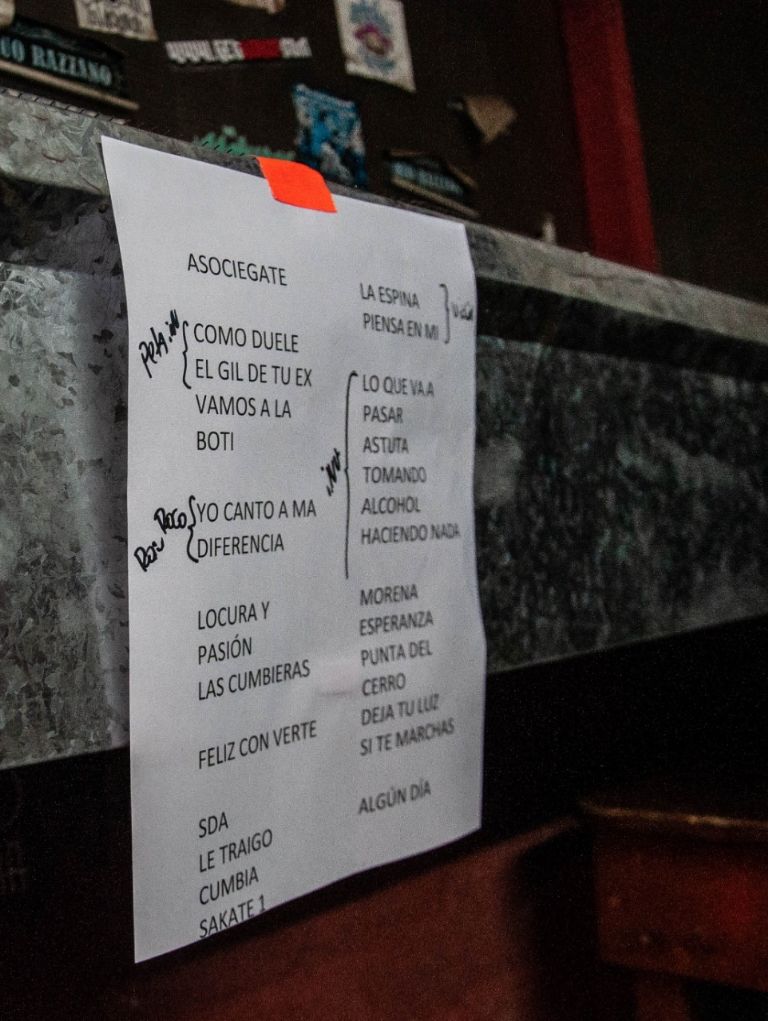 The public, grateful for so much, didn’t even ask for another one in the certainty that the band gave it their all.

After the hurricane passed, I got lost in Santiago humming “… I know well which way to go. It is my feet that must endure.”