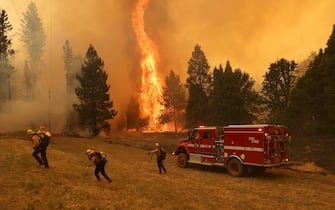 It’s fire alarm in California, also due to drought and high temperatures. L’Oak Fire it became one of the biggest fires in the state in 2022 and threatens it too Yosemite National Park

Sky VOICE: Drought and climate change, what future awaits us. WATCH THE VIDEO

The fire broke out at the edge of the park on the afternoon of July 22nd and it is quickly grown up to swallowing more than 4,000 hectares. They have been arranged thousands of evacuationswhile the firefighters are struggling to contain the stake

California Governor Gavin Newsom proclaimed a state of emergency for Mariposa County due to the effects of the Oak fire near Yosemite National Park. Thousands of people were ordered to flee the area of ​​the fire, which became one of the largest fires of the year in California.

Fires in Italy, it will take 15 years to rebuild the destroyed woods

The fire started on Friday afternoon southwest of the park, near Midpines, in Mariposa county

Heat and fires in Europe, Greta Thunberg: “Like sleepwalkers towards the precipice”

A spokesperson for the Sierra National Forest stated that evacuation orders were issued for over 6,000 people living in the sparsely populated rural area. The American media pointed out that, due to the flames that rage not far from the Yosemite park, more than 2,000 homes are without electricity.

There are several fires that have broken out in California these days, which have devastated thousands of hectares of land: probably the fires have also broken out due to the high temperatures. L’heat wave which affected various regions of the state, in fact, increased the risk of fires

Oak Fire quickly became one of the largest fires in the state in 2022 and threatens Yosemite National Park, where the giant sequoias had already been threatened by flames in recent days. The fire – described as “explosive” by officials – went from around 600 acres to around 9,500 (3,800 hectares) within 24 hours and continues to grow.

Concentrated in Mariposa County, it has already destroyed ten properties and damaged five more, while thousands more are threatened. More than 6,000 people were evacuatedsaid Hector Vasquez, head of public information at the California Department of Forestry and Fire

In recent years, California and other parts of the western United States have been ravaged by huge, rapidly evolving wildfires, caused by years of drought and climate warming. According to Daniel Swain, a climatologist at the University of California, the blaze “has spread in all directions due to burning and drought. The series of relatively small and nondestructive wildfires that have hit California so far this season appear to to be over”

Citizens posted pictures of a huge and impressive vortex of thick smoke rising from the forestlike a tornado, a dangerous phenomenon that can fuel the fire

“The extreme heat will continue in the central US and will extend to the Northeast this weekend, with record temperatures expected for Sunday across the region, “the National Weather Service (NWS) said.

The hot it was particularly sweltering in Washington, where the temperature touched the symbolic threshold of 100 degrees Fahrenheit (38 degrees Celsius). New York was not spared, with temperatures close to 35 degrees. According to the NWS, the temperature could also reach 43 degrees in some areas of Utah (west), Arizona (south) and in the northeast.