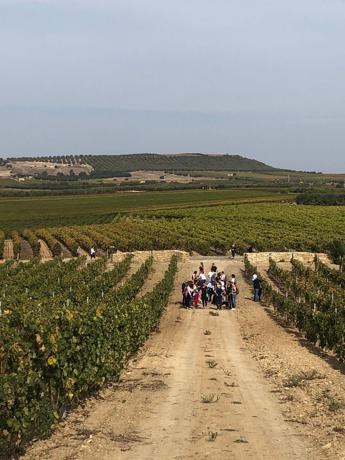 The difficulties in finding manpower to harvest grapes in the stories of two wine producers Antonio Rallo (Donnafugata) and Valentina Argiolas (Argiolas) interviewed by Adnkronos.

The harvest is slow due to the lack of manpower, or rather of those who go to the vineyard to pick the grapes. A situation that unites the wine producers of Sicily and Sardinia, who point to the citizenship income as one of the main causes. Income that, according to the latest INPS data, benefiting from it are over 2.5 million people, of which 1.72 in the South and in the Islands. The dramatic testimony comes from Antonio Rallo (Donnafugata) and Valentina Argiolas (Argiolas), interviewed by Adnkronos. “This year is the first time for the harvest we have difficulty in finding workers to harvest grapes. A real plague” says Rallo, president of the Doc Sicilia Consortium and CEO of the Donnafugata family business, a well-known brand. also abroad as an expression of Sicilian quality wines.


“We have always managed to find laborers by word of mouth and instead this summer – reveals the entrepreneur – we have had serious problems. We are much more than worried. It is a wake-up call for the next few years because the issue also affects other sectors. such as the cultivation of vegetables and fruit that we live more and more since the citizenship income exists “. Numerous are the examples illustrated by Rallo of people contacted by his company and also by others in Sicily, who have refused job offers, and who are answered: “no thanks, I am an income earner and I cannot work, eventually I could but without appearing “. But whoever is responsible for an established and serious business like Donnafugata acts with fairness and does not give in to such compromises. “Surely we must give certainties to those who are less fortunate but it is not possible to have many young people who benefit from the income”, comments Rallo laconically.

On the same wavelength the entrepreneur Valentina Argiolas of the homonymous winery, a symbol of Sardinian wine excellence. “The harvest is very difficult this year in Sardinia, there are no tractor drivers, pruners, grafters, basically technicians who work with their hands” she says. “These are professionals that belong to a generation of over 60s who are not replaced by young people. Young people do not want to learn the trade because for the same salary they prefer to stay at home so as not to lose their citizenship income. And therefore – he stresses – we are forced to call more and more teams outside the territory “.

Difficulties are also highlighted in the supplies for this winery. “We are witnessing increases in the costs of materials that we are unable to manage – he says – and so we are thinking of abandoning some small productions such as sapa, an artisanal product that is obtained with cooked must, because we no longer find the bottles”. Not to mention other materials such as “paper, cardboard, capsules: suppliers have increased prices and winemakers do not know how”. Considerable problems to which the expensive energy is added.