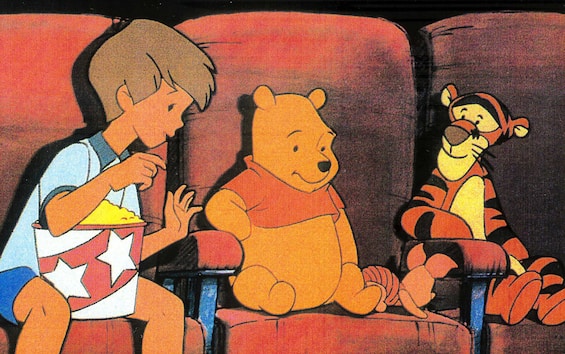 There will be a prequel film of Winnie the Pooh: DreamWorks is working on it, building on the success of the film projects by Paddington. To develop the yellow bear film will be Mike de Seve, director of one of the most cult animated series of the nineties: Beavis and Butt-Head.

Mike de Seve here will be in the double role of director and co-writer (the script will be written together with John Reynolds, author of the script of The Mr. Peabody & Sherman Show). And that’s not all: it seems that the film will be followed by a television series.

Last year the rights of Winnie The Pooh were freed from copyright, which led to the birth of a horror film which (precisely because it was unexpected) was and still is on everyone’s lips, entitled Winnie the Pooh: Blood and Honey and arriving in US theaters next February.
The unpublished version of Bloody Winnie (which will arrive in cinemas on February 15, even if the release will be very particular: available only for one day) tells the story of Christopher Robin who, once he grows up, will have to leave for college. Thus he will abandon his friends, Winnie and Piglet, to themselves, who – gone crazy by the abandonment of their human friend – will begin to commit atrocities against other human beings. This pearl is directed by director Rhys Frake-Waterfield. “Because Christopher Robin’s friends will have to fend for themselves, they will become ferocious, returning to their animal origins. They will no longer be domesticated figures, they will be like a vicious bear and a pig on the hunt for prey”, these are the words of Rhys Frake-Waterfield.

The prequel to Winnie the Pooh

Regarding this new prequel film, co-writer John Reynolds presents it this way: “We want to tell the origins of the cute young teddy bear and his friends, showing them when they are still small, and we will do it in a way that connects them to the our 21st century”.

And director and co-writer Mike de Seve adds: “I think this puppy can relate to the new generation, and his desire for honey and all the dynamics of his stories can be told in a fresh way. And then the whole group is hilarious, and I think they can be even more so in their younger version”.

In the production team of the Dreamworks prequel there will also be the Baboon studios (from which masterpieces such as angry Birds And Gigantosaurus, also these productions which director Mike de Seve worked on), Winvest Group and IQI.

Executive producers include Charlene Kelly (Next Gen) for Winvest, and Khiow Hui Lim, also for Winvest.

The character Winnie the Pooh is the protagonist of the homonymous series of children’s novels created by Alan Alexander Milne.

Its first appearance dates back to 1924. Initially in our country it was translated with the Italianized name of Ninni Puf (and it is also known as Winnie Puh, Winny-Puh, Winny Puh, Winnie Pooh and Winnie-the-Pooh, with dashes ).

The character of the irresistible anthropomorphic teddy bear debuted in a story published by Milne in the Christmas edition of London Evening News. The success was such as to make it the initial episode of the novel of the same name, released in 1926.

Other episodes were told on the radio, and listeners liked them so much that they pushed the author to collect the best episodes to make a children’s novel. Winnie Pooh. This work was published in 1926. In 1927 the collection of poems was released Winnie the Pooh. We are now six years old (Now We Are Six) and then, in 1928, the second novel in the series, The street of Puh (The House at Pooh Corner).

All the Winnie stories written by Milne were illustrated by Ernest H. Shepard, who to get the right inspiration spent many days at Milne’s house, to observe the puppets of Christopher Robin (the author’s son, who is a character from the his stories) and the grove near the house (which became the Hundred Acre Wood in the novel).

In 1929 Milne sold the rights to the characters of the saga to Stephen Slesinger and, in 1961, to the Walt Disney Company, which made Winnie and his companions the protagonists of a successful cartoon series.