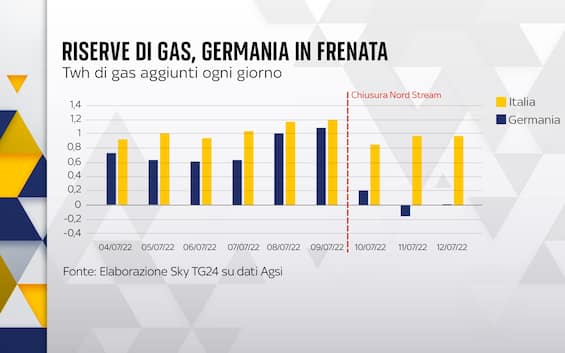 The pipeline has been put into maintenance and now Europe risks running dry. This is how solidarity between EU countries would work if the infrastructure did not reopen

The Bank of Italy has published decidedly negative economic estimates in the event that Russia closes the gas tap to our country. If this were to happen, the 2022 GDP would grow by less than one percentage point (remember that the two points earned this year are due to the dowry of 2021, so it would still be a decline) and would end in negative in 2023, even falling. 2%. This scenario has become increasingly probable after the announcement of the closure of Nord Stream: the gas pipeline, the largest of those linking Russia and Europe, is closed for scheduled maintenance from 10 July and will continue to be so until Thursday 21 at 6:00 in the morning, when it should be operational again.

These days we can see first-hand what would happen to Europe without Russian gas. As Agsi data reveal, since Monday 10 July Germany has no longer been able to replenish the reserves it will need in the winter, when demand will increase to heat homes and run businesses. On Tuesday 11 July it was even forced to extract gas from the tanks rather than pump it, given the shortage it is experiencing. This is why in recent days Italy has overtaken Berlin as a percentage of storage of reserves, which must reach at least 80% by October.

So what could happen if Germany, the largest consumer of natural gas in Europe, were to risk a shortage? It would be forced to reduce consumption, in particular by rationing industrial ones (and therefore closing the most energy-intensive factories, financing them to avoid bankruptcy). But even if this were not enough, the country could ask for the help of other European states. According to a EU regulation of 2017, solidarity on gas is mandatory: if a country in difficulty calls, the others are obliged to sell it the gas they have, through “non-market” interventions, that is, by acting directly with public instruments in the private segment. The condition is that the state in difficulty has already rationed its industries and that it risks having to do the same with families and essential public services, such as schools and hospitals. Only then will it be able to activate the mechanism, which is mandatory to the point of not putting the families of other countries at risk. It is therefore possible that Italy, thanks to supplies from Algeria, Azerbaijan and liquefied gas, will be called upon to help Germany. To the point of rationing the national industry to protect German families from disaster. Particularly at risk is gas from Northern Europe, which enters Italy from Passo Gries. In the first half of the year, according to Snam data, more than 4 billion cubic meters arrived, which we may have to give up to protect the other European countries affected by the Russian cuts.

According to the EU Commission, in fact, there are now a dozen states affected, in particular Poland, Bulgaria, Finland, the Netherlands and Denmark, which have suffered a total stop after refusing to pay for gas in rubles.