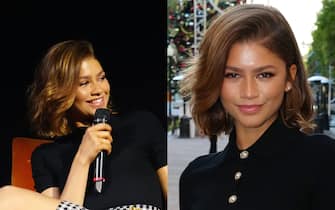 Script needs (and not only that) have prompted Zendaya Coleman to change her hairstyle, cut and hair color very often. This time the actress has given a nice cut to her hair which, while still remaining fluffy, has become really very short. Her cut for 2023 is a boyfriend bob, a bob with a few longer strands on the front that she has left soft and wavy

American actress and comedian Hannah Einbinder has attracted attention on the red carpets this season for her looks that have worked a lot thanks also to her haircut, a straight bob that she combs with a flat and smooth wave

The bob of Michelle Williams, one of Hollywood’s most faithful to the short hairstyle, is instead a cut with a rounded shape which, worn with a parting in the center, highlights the symmetry of the oval. Her cut, however, hides a secret in the back which is thinned out to give more volume and movement to the front

Fashion, the trends for autumn-winter 2022-2023 from the fashion shows. PHOTO

Since she cut her hair Florence Pugh has finally given character to her looks halfway between the old style diva and the rebel doll with the second mood prevailing over the first especially in the wet look hairstyles with modulated strands on the forehead that highlight her eyes like a doe. So she too is a fan of the bob-cut, with lightened ends and scaled tufts on the front, a cut that allows many quick and very current hairstyles

How to wear knee-high boots by copying the stars

Selma Blair, icon of cinema and TV of the 2000s is back to Californian blond, a perfect shade for her pixie cut with messy tufts, the work of celebrity hairstylist Bridget Brager

The French actress Marina Fois chooses a short cut, pulled back, with the lengths brought to the front like a gust of wind. With this hairstyle, the 52-year-old doesn’t have to give up hairstyles with a sophisticated allure like this one, bowl-shaped but messy

Lisa Rinna at the People’s Choice Awards brought the spotlight back Pompadour style, the very popular hairstyle in the fifties which consists in giving a lot of volume to the hair on the front by combing it backwards. With his base of short hair, the stars and stripes TV star was able to dare with a cheeky and masculine haistyle, to Elvis, obtained thanks to a good dose of fixing products

Winter hats, how to combine them by copying the stars

Zoe Kravitz is now a point of reference in terms of even very short cuts but not for this without an irresistible touch of femininity. Her most recent hairdo with hints of bangs is one of the most jaunty haistyles seen on the red carpet

Taylor Russell was one of the it-girls of the year, launched into the Olympus of divas for her talent and her natural inclination to interpret the fashions of the moment in a personal way. Her short hair helped her stand out from the very first moment from her colleagues and her retro-inspired hairstyles, which are built on a twenties “boyfriend” cut, are refined and contemporary at the same time

Sixty-four years old and no desire to cede the scepter of style icon. Jamie Lee Curtis continues to be a trendsetter, especially in terms of hairstyle. Always a fan of the pixie cut, this season she was not afraid to further shorten the lengths for an even cooler final effect