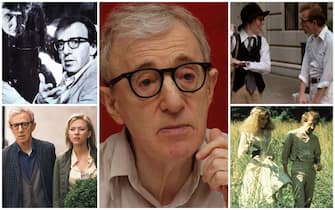 Woody Allen turns 85. Genius of humor, prolific author and winner of 4 Academy Awards (three for screenplay and one for directing, out of 24 nominations, none of which was withdrawn in person), he was born in New York on December 1, 1935. In five decades career has created an inimitable style and created a long series of masterpieces. Here is a rundown of his most famous works (photo credits: WebPhoto)

In 1966 Allen made his directorial debut with “What are you doing, stealing?” (What’s Up, Tiger Lily?). It is a replacement of the Japanese film “Kokusai himitsu keisatsu: Kagi no Kagi” with dialogues and sounds entirely adapted to create a plot completely different from the original, in a comic and surreal way, a parody of a James Bond film (photo credits: WebPhoto)

Woody Allen, 85 years of an irresistible observer of society

Woody Allen, the memoir snubbed by publishers after the allegations

In 1971, Allen made “The Dictator of the Free State of Bananas” (Bananas), the third and final written with screenwriter and childhood friend Mickey Rose. It tells the story of Fielding Mellish, a neurotic and clumsy industrial tester for a large company. To impress a girl, he finds himself involved in a revolution in a Latin American state (photo credits: WebPhoto)

The most beautiful quotes from Woody Allen’s films

Woody Allen returned to theaters in 1972 with “Everything you ever wanted to know about sex * (* but you never dared to ask)” (Everything You Always Wanted to Know About Sex * (* But Were Afraid to Ask)). It is a surreal film, made up of seven episodes, each of which makes fun of a specific aspect of sexual life (photo credits: WebPhoto)

Woody Allen publishes his autobiography and denies abuse of his daughter

The following year “Il dormiglione” (Sleeper), a sci-fi comedy set in 2173. Together with “Try It Again, Sam” is the film that marks the beginning of the partnership between Allen and Diane Keaton. The two had a long relationship and collaborated on 7 films (photo credits: WebPhoto)

In 1975, Allen made “Love and War” (Love and Death), a comic masterpiece set in 19th century Russia. Inspired by Tolstoy’s “War and Peace”, it is a film full of quotes and parodies of the great Russian classics (especially Dostoevsky) (photo credits: WebPhoto)

Allen: “A lockdown movie? Doesn’t inspire me at all”

In 1977 he arrives in the rooms “Me and Annie” (Annie Hall), film of Allen’s definitive consecration. Listed on the charts of the best comedies and best movies of all time, it is the tale of the tormented love story between comedian Alvy Singer and Annie Hall. The film won 4 Oscars: film, directed by Allen, lead actress for Keaton (who also won the Golden Globe) and best original screenplay for Allen and Marshall Brickman (photo credits: WebPhoto)

Woody Allen: “Me and Annie? I did better”

After Allen’s first dramatic film, “Interiors” in 1978 (which received 5 Oscar nominations), in 1979 it was the turn of “Manhattan”, a splendid black and white fresco that recounts the troubles of the television author Isaac Davis, between unstable romantic relationships and emotional insecurities (photo credits: WebPhoto)

Woody Allen and New York, an eternal love in 5 films

Allen’s next films are “Stardust Memories” (1980) and “A Midsummer Night’s Sexy Comedy” (1982). Then in 1983 it was the turn of “Zelig”, a parody of a documentary from the 1920s and 1930s. The protagonist, Leonard Zelig, is the victim of a disease that manifests itself in the psychosomatic transformation of traits depending on the context in which the man finds himself (photo credits: WebPhoto)

In 1984 “Broadway Danny Rose” was released, the story of a theatrical agent and former comedian who looks after the interests of crazy clients. The film received two Oscar nominations, both for Allen, for directing and for the original screenplay (photo credits: WebPhoto)

The following year it was the turn of “La rosa purpurea del Cairo” (The Purple Rose of Cairo), starring, among others, Mia Farrow, Jeff Daniels and Danny Aiello. Set in the years of the Great Depression, it is the surreal story of Cecilia and her favorite movie character, Tom Baxter, who physically exits the screen and enters the woman’s real life (photo credits: WebPhoto)

At the rate of one film a year, Allen in 1986 made “Hannah and her sisters” (Hannah and Her Sisters), with a stellar cast. The film, a great box office success and considered one of the director’s masterpieces, obtained 7 Oscar nominations, winning three (Best Supporting Actor to Michael Caine, Best Supporting Actress to Dianne West and Best Screenplay to Allen) (photo credits: WebPhoto)

In 1987 there was “Radio Days”, a tribute to the American lifestyle in the golden years of radio and an act of love for the city of New York (as in many Allen’s films). The director does not appear in the film but is the narrator. It obtained two Oscar nominations and is remembered as the only film that sees Allen’s two muses and historical companions acting together, namely Mia Farrow and Diane Keaton (photo credits: WebPhoto)

After “September” (1987), “Another Woman” (1988) and an episode of “New York Stories”, in 1989 Allen directed “Crimes and Misdemeanors” (Crimes and Misdemeanors), flop at the box office but considered by critics as one of the author’s peaks. Inspired by Dostoevsky’s “Crime and Punishment”, it has received three Oscar nominations (director, screenplay and supporting actor to Martin Landau) (photo credits: WebPhoto)

In the following years Allen made “Alice” (1990), “Shadows and Fog” (1991) and “Husbands and Wives” (1992). Then in 1993 it’s up to “Mysterious murder in Manhattan” (Manhattan Murder Mystery), halfway between thriller and comedy. Film full of cinephile citations, sees the return of the muse Diane Keaton (photo credits: WebPhoto)

Followed by “Bullets on Broadway” (1994), “The Goddess of Love” (1995) and “Everyone Says I Love You” (1996). In 1997 Allen directed “Harry in Pieces” (Deconstructing Harry), nominated for an Academy Award for Best Original Screenplay. The director plays Harry Block, a successful author who for the first time is facing “writer’s block” and is struggling with a depressive crisis (photo credits: WebPhoto)

In 1998 it was the turn of “Celebrity”, which tells the story of a journalist who dreams of writing a novel and tries to make it to Hollywood as a screenwriter. A movie star offers him to introduce him to his environment. Extremely rich cast that includes Kenneth Branagh, Melanie Griffith, Winona Ryder, Charlize Theron and Leonardo DiCaprio. There is also a famous cameo of Donald Trump as himself (photo credits: WebPhoto)

1999 is the year of “Agreements and disagreements” (Sweet and Lowdown), a fake documentary focusing on the fictional character of Emmet Ray, a figure inspired by Django Reinhardt. Sean Penn and Samantha Morton were both nominated for Oscars (for Best Actor and Best Supporting Actress, respectively) (photo credits: WebPhoto)

After a series of films that did not thrill audiences and critics, in 2005 Allen returned to the limelight with Match Point. Dramatic film with thriller tints, it marks the beginning of the director’s association with Scarlett Johansson, his fetish actress of the last 15 years. It had an excellent response in the hall and obtained an Oscar nomination (for the screenplay) and 4 Golden Globe nominations (photo credits: WebPhoto)

Scarlett Johansson will also be the protagonist of the next “Scoop” in 2006. Then in 2007 Allen realizes “Dreams and Crimes” (Cassandra’s Dream), his third consecutive film set in Great Britain. Colin Farrell and Ewan McGregor are two brothers who, due to serious financial problems, are pushed to commit murder (photo credits: WebPhoto)

In 2008 Allen moved to Spain and created “Vicky Cristina Barcelona”, in which the intertwining of a local painter (Javier Bardem) with two American tourists (Rebecca Hall and Scarlett Johansson) is told. And the artist’s ex-wife (Penélope Cruz) creeps into the background. The film won a Golden Globe for Comedies and Cruz won an Oscar for Best Supporting Actress (photo credits: WebPhoto)

After two less successful films (“Just That It Works” and “You will meet the man of your dreams”), Allen churns out in 2011 “Midnight in Paris”. The French trip was a box office success and allowed the author to win another Oscar for the original screenplay (also awarded at the Globes), as well as 3 other Academy nominations (photo credits: WebPhoto)

After the Italian “To Rome with Love” in 2012, the following year it was the turn of “Blue Jasmine” who collected international awards. Lead star Cate Blanchett won Oscars and Golden Globes for her role as Jeanette ‘Jasmine’ Francis (photo credits: WebPhoto)

Allen’s latest works have been coldly assessed by critics. “Magic in the Moonlight” (2014), “Irrational Man” (2015), “Café Society” (2016) and “The Wheel of Wonders” did not thrill. In 2019, “A rainy day in New York” (A Rainy Day in New York) made with great difficulty due to the heavy controversies that the director has suffered over old allegations of sexual abuse dating back to 1992.

The latest fil of Allae “Rifkin’s Festival”. It’s the twist of Mort Rifkin (Wallace Shawn) is a former professor and film fanatic married to Sue (Gina Gershon), film press officer. Their trip to the San Sebastian Film Festival in Spain is troubled by the suspicion that Sue’s relationship with her young director client Philippe (Louis Garrel) goes beyond the professional sphere. The journey, however, is also an opportunity for Mort to overcome the block that prevents him from writing his first novel and to reflect deeply.