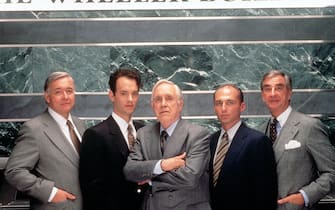 December 1st is the World AIDS Day. Over the years there have been various masterpieces of cinema that have dealt with the theme from different angles. Also Sky Cinema Drama, on Wednesday, dedicates a special program with 4 films on air from 4.50 pm: “The Hours”, “The Normal Heart”, “Gia – A woman beyond all limits” and “Philadelphia “, a 1993 masterpiece and one of the first to deal with the subject, which tells the story of the legal battle of a lawyer, dismissed from his firm because he was HIV-positive

“The Hours“is a 2002 film based on the Michael Cunningham novel of the same name. The film is divided into three stories, one of which is about a bisexual editor, Clarissa Vaughan, who is throwing a party for her ex-lover Richard who is about to dying of AIDS

How Meryl Streep has changed

“Dallas Buyers Club“is from 2013 and won 3 Oscars. It tells the true story of entrepreneur Ron Woodroof who after discovering that he is HIV positive, rejects the idea of ​​not being able to live beyond the thirty days he has been diagnosed. He will be able to survive for others. seven years taking T-peptide, a protein frowned upon by the Food and Drug Administration (FDA)

“120 beats per minute“is a 2017 film, but set in the 90s. It tells the love story between Sean and Nathan, two activists of the Act Up-Paris movement who support a peaceful campaign to draw attention to AIDS

“About women“is a 1995 film that tells the story of three strangers, Robin, Jane and Holly, who will find themselves sharing a journey and then become friends. One of them is suffering from AIDS and is struggling with the discovery of the disease and prejudices around it

“What about Willy?“is a 1990 film and the first major film production to really address the AIDS problem. Set between 1981 and 1989, it follows the story of a group of gay friends who face what appears to have become an epidemic that was hitting the New York gay community in those years

“Gia – A woman beyond all limits“is a 1998 film starring Angelina Jolie. It is the fictionalized biography of the lesbian model Gia Carangi, portrayed in the film as a bisexual who disappeared at a young age due to complications associated with AIDS

“The witnesses“is a 2007 French film starring Manu who, after arriving in Paris to see his sister Julie, begins dating first a doctor and then a policeman. Following his story, the film also shows the first discoveries and studies of the time about AIDS

“On a moonlit night“is a 1989 film by Lina Wertmuller. A journalist, while carrying out an investigation into AIDS, discovers that he is HIV-positive. From that moment he decides to dedicate his life to prevention of the disease

“Love for life“is a 2011 Chinese film that tells the story of two lovers both suffering from AIDS, a disease that has spread to their small village due to illicit blood trafficking.

“Wild nights“is a 1992 film in which the protagonist is Jean who, after discovering that he is HIV-positive, continues with the excesses between drugs and sex

“Rent“is based on a theatrical musical and is a 2005 film. A group of friends live by the day in New York and many of them are ill with AIDS. Amid uncertainties about the future and economic hardships, young people find a way to draw from their problems a source of energy and creativity

“The normal heart“is a film from 2014. Ned Weeks, a well-known writer and gay activist, campaigns to do research and to inform the community about the new AIDS disease which is spreading more and more and which by many is denounced simply as the” cancer of the gay”

“All about my mother“is a 1999 film by Pedro Almodovar. After the death of her son, to whom she had never revealed the identity of her father, a woman sets out in search of the man, a transsexual named Lola. In the course of the film she also meets a missionary nun who finds herself pregnant and HIV positive