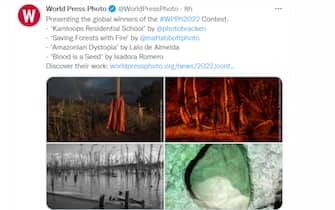 In Amsterdam the i winners of this year’s World Press Photo, the most important photojournalism contest in the world. From the capital of the Netherlands, precisely from De Nieuwe Kerk, the world tour of the “World Press Photo Exhibition 2022” will begin on April 15, the exhibition of all the winning photos that will touch 66 locations in 29 countries, including Italy.

WATCH THE VIDEO: Finland blocks Russian art at the border

To win the “World Press Photo of the year”, Awarded for the best single photo, is the Canadian photographer Amber Bracken with “Kamloops Residential School“: The photo, taken for the New York Times, immortalizes some red dresses hanging from crosses along a road to commemorate the dead children at Kamloops Indian Residential School, in Canada, an institution created for indigenous children where they were about 215 tombs discovered

The winning photo, comments the president of the jury Rena Effendi, it is “a kind of image that creeps into memory and that inspires a kind of sensory reaction. Looking at it, it almost seems to feel a quiet, a peaceful moment of global reckoning for the history of colonization, not only in Canada but throughout the world ”

The winning works were chosen from 64,823 candidates, including photographs and open formats, made by 4,066 photographers from 130 countries. Among the other prizes there is the “World Press Photo Story of the Year“, For the best story, went to the video”Save the forests with fire”Of the Australian Matthew Abbott

Exhibitions in Italy and abroad, updates

The “World Press Photo long-term project award“, For the best long-term project, was instead assigned to”Amazonian dystopia” by Lalo de Almeidafrom Brazil: it is a photo that shows how the Amazon rainforest is seriously threatened by deforestation, mining and the exploitation of natural resources

The “World Press Photo open format award”, For the best Open Format project, he went to video “Blood is a seed” by Isadora Romerofrom Ecuador: a testimony of the loss of knowledge and ancestral customs of indigenous peoples subject to forced migration