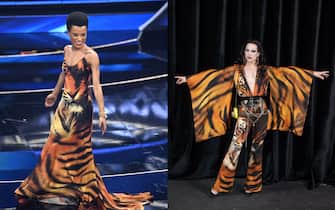 With the World Tiger Day, which has been celebrated on 29 July since 2010 to raise public awareness on the extinction of these precious feline species, the attention of fashion enthusiasts is all for the animal print and for the brindle variant, a must in many collections since the seventies. In 2022 the tigers of Roberto Cavalli’s collections arrived on the most prominent stages in the world: in Sanremo, with Lorena Cesarini (left) and at Milan Fashion Week, with the drag queen Violet Chachki (right)

Fausto Puglisi, designer of Roberto Cavalli, is relaunching the historic Italian brand thanks to the current reworking of the brand’s stylistic elements, primarily the prints inspired by the animal world, and his clothes are widely appreciated by pop stars. Anitta (left) is wearing a Spring / Summer 2022 garment; Dua Lipa (right), one of the Pre-Fall 2022 collection

Dolce and Gabbana, in the wake of the overabundant fashion revival of the early 2000s, also brought all kinds of animalier patterns back to the catwalk and the tiger print appeared in both the latest men’s and women’s collections

Recent reinterpretations of the animalier style, which has very ancient origins, have led to experiments in a fluorescent key. Here is Anitta on the stage of Coachella 2022 with a multicolor striped creation created for her by Fausto Puglisi

Coachella style, the looks of the stars from Chiara Ferragni to Gigi Hadid. PHOTO

The tiger print, provocative and elegant at the same time, is an inspiration that animates even the most beautiful haute couture creations, like this one signed by Zuahir Murad brought to the red carpet of the Cannes Film Festival 2022 by Alice Abdel Aziz

The red carpet is traditionally the perfect setting to show off the most whimsical creations ever and every era has its tigers. Meet Nicki Minaj in 2018 in a voluminous Alexander Wang tiger dress (left) and Margot Robbie in a Gucci dress with an embroidered tiger at the premiere of Suicide Squad in 2016

Laverne Cox also sported a semi-transparent dress with a flocked tiger print this year. In her case, it is a LaQuan Smith creation, Fall / Winter 2021 collection

Tigers are a symbol of courage and provocation, it is no coincidence that they are perfect for the seductive looks sported by strong and influential women such as the model Winnie Harlow, champion of diversity and body positivity

According to the Chinese calendar, which associates an animal of the zodiac with each year, 2022 is dedicated to the Tiger, a feline celebrated by the fashion world with specific dedicated collections. Gucci has created an entire line of ad hoc garments and accessories, Gucci Tiger, designed by Alessandro Michele and photographed by the lens of Angelo Pennetta. Among the testimonials, Asian stars such as Lu Han and NiNi

Tigers were certainly the inspiring motif of the popular and popular Kenzo Tiger collections that populated the wardrobes of fashion addicts for many seasons in the 10s of the 2000s.