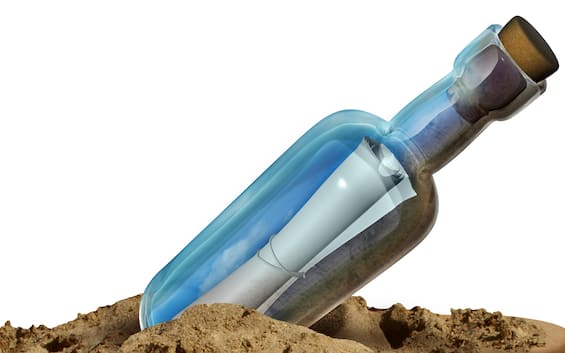 A whiskey bottle with a message inside, buried for 135 years, was recently found by Paul Allan, owner of the WF Wightman Plumbing company, while doing some work inside a house in the Morningside area of ​​Edinburgh. “The room is 10ft by 15ft and I cut exactly around the bottle not knowing it was there. I can’t believe it,” Allan told BBC Scotland. The bottle was broken with a hammer blow, because the piece of paper inside could not be pulled out. “We were desperately trying to pull the ticket out with tweezers and pincers, but it started tearing. We didn’t want to damage it further so we had to break the bottle,” owner of the house, Eilidh Stimpson, told Edinburgh Live.

The authors are two workers

The message was signed and dated by two workmen and read: “James Ritchie and John Grieve laid this floor, but did not drink the whisky. October 6, 1887. Anyone who finds this bottle may think our dust is flying down the road.” After the find, a friend of the family looked into the 1881 census and found the names of two men who lived a few miles apart in the Newington area of ​​Edinburgh.At this point, a curator at the National Library of Scotland recommended the family to keep the message in an acid-free place.

Confirmation of authenticity is awaited

If the discovery in Scotland is confirmed as authentic, and the date verified with precision, the ticket of the two Edinburgh workers could therefore become, with its 135 years, the oldest message in a bottle in the world. Prior to this discovery, the oldest message in a bottle had been found in Australia in 2018 by a family walking along a beach north of Perth on the west coast, thrown overboard by a German sailor and left inside a bottle. a bottle of Dutch gin for 132 years.