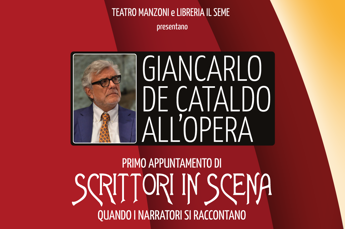 It will be ‘Giancarlo De Cataldo at work’ to open ‘Writers on stage’, the new initiative that offers a series of meetings at the Manzoni Theater in Rome in collaboration with the historic bookshop Il Seme, where the protagonists are the authors who stage themselves themselves. The first appointment is Sunday 28 November at 8.30 pm with the author of ‘Romanzo Criminale’ who together with the journalist Alberto Toso Fei will tell the genesis of his latest literary character: Manrico Spinori della Rocca, protagonist of a trilogy of successful detective stories released by Einaudi Free Style in recent months.

Count Manrico Spinori della Rocca – a melomaniac magistrate who moves with aristocratic detachment in contemporary Rome – is a convinced supporter of a curious and infallible theory: there is no crime that has not already been told by the great melodrama of the past. So – to untie the knots of his investigations – it remains only to identify the perfect work that will be able to reveal the final twist of the story.

‘Giancarlo De Cataldo at work’, directed by Nicola Calocero, is the story of the writer’s ‘workshop’ and of an overwhelming and recent passion that is influencing his maturity. In addition to sharing the scene ‘in duet’ with Alberto Toso Fei, De Cataldo will comment on some opera passages with the audience, with video contributions of recent productions. The repertoire from which Count Manrico’s investigations are based to validate his unprecedented theory, which is proposed as a new and stimulating interpretation to update two great traditions: that of the detective story and that of the Opera.

‘Scrittori In Scena’ is an initiative born from an idea by Carlo Alighiero and produced by the Ata Group, to stage the art and personality of individual writers. Meetings that go beyond the presentation of books, beyond the promotion of the single title to look for a rediscovered way of being together with the authors in the narration and sharing with the public.