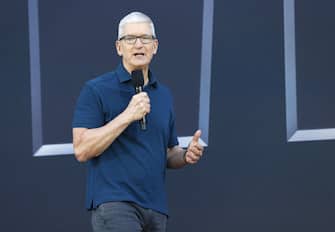 “Last year we saw millions of developers at the Conference and we expect to see even more: a community of 34 million in total has developed. We cultivate the next generation of developers and we also work for underrepresented communities.” Apple CEO Tim Cook opening the annual WWDC22 Developer Conference which took place online this year

WATCH THE VIDEO: Apple, salaries on the rise for all US employees

MACBOOK – Among the most anticipated news, Apple presented the new updated 13 “MacBook Air and MacBook Pro, both with the new M2 chip. “We are thrilled to introduce our new M2 chip,” said Greg Joswiak, Apple’s senior vice president of Worldwide Marketing. M2 has an 8-core cpu and up to 10-core gpu, with maximum 24 GB of memory

THE ANNOUNCEMENT OF THE NEW MACBOOKS

Apple also premiered iOS 16, with the biggest ever update of the lock screen and new intelligent functions for sharing and communicating, which will completely transform the iPhone experience. Here are all the Announcements

THE INDISCRIPTIONS ABOUT THE PRESENTATION

LOCK SCREEN – With iOS 16, as stated in the Apple press release, “the lock screen becomes more personal, beautiful and useful. Thanks to a new multilevel effect, the subjects of your photos will appear around the time creating a sense of depth. The user can also change the appearance of the date and time with expressive font styles and colors ”

ALL NEWS ON THE APPLE SITE

APPLE PAY – In the United States, Apple Pay Later offers the possibility to easily and securely divide the cost of a purchase made with Apple Pay into four installments of the same amount to be paid over a period of six weeks, at zero interest and without any type of commission.

HOME AUTOMATION – The app Home “Allows you to interact with accessories, organize and view them easily. In addition, improvements to the underlying architecture allow for more efficient and reliable control of home automation devices. With the update of iOS 16, the app will be compatible with Matter, the connectivity standard for the smart home (available in late autumn), which allows a wide range of accessories to work in perfect harmony across multiple platforms to achieve the dream of having a smart home ”

PRIVACY – A privacy function has also been launched to protect victims of abuse. It’s called Safety Check and it’s a new item in the iOS 16 menu, with which you can quickly disable data sharing with friends and applications. As explained by the company from the Apple Park stage, it wants to give people a way to protect their personal life quickly. In the iPhone settings you will therefore have a button to revoke all links shared with a person, including the location of the phone or links to photos saved on the cloud

MACOS VENTURA – The new version of the Apple computer operating system also arrives. Among the most significant innovations is the Continuity function of the camera, which allows you to use the iPhone as a webcam, and with the arrival of Handoff in FaceTime, you can start a FaceTime call on iPhone or iPad and transfer it to the Mac

OTHER NEWS – Safari introduces shared panel groups, while with In family It’s even easier to set up accounts for boys and girls with the right parental controls right out of the box. Siri now allows you to launch quick commands as soon as you download an app, with no previous configuration

And again, the app Health introduces the Medicines function, which allows the user to create and manage a list of their medicines in a practical way. And in Game Centerthe dashboard has been redesigned to show friends’ activities and achievements in one place