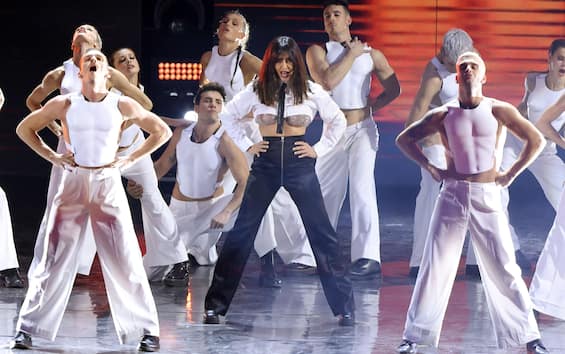 To the delight of Millennials, the 90s are back: after the wait reunion of Paola and Chiara at the next edition of the Sanremo Festivalon December 8, she arrived on the stage of the X Factor Grand Final (RELIVE THE LIVE HERE) the breathtaking performance of Amberwhich exploded with I belong to youhit presented in 1994at just 17 years old, in cult programme It’s not Rai. The electronic rhythm of the first notes revealed the sinuous choreography of the corps de ballet among the flames, then she arrived, Ambra, a traveler in the time machine who reproduced the refrain and the movements copied in the bedrooms by the girls of thirty years ago in the afternoons after school: “I belong to you and I care, and if I promise then I keep, you belong to me and if you care, you promise and then keep”. Since then the wavy bob has given way to smooth hair, the red tie has replaced the black one and modern steps have replaced the naive gestures of the time, but the public has once again opened the diary of memories, relived platonic loves and sworn to never shed tears for first counter crush again.

“Ambra was ours in ’94 and ’95 Britney Spears. He was the center of a universe that determined pop for a time, ”she told the microphones of in November Radio Deejay Tiziano Ferrowhich in the last album The world is Ours fulfilled the “dream” of singing with the judge in the song Amber/Titian. “How much can I love” he echoed yesterday in an Instagram story Clare Ferragniguest in the audience of X Factor and first supporter of her husband’s team Fedez who, in the live Instagram filmed at the judges’ table during the performance, showed the same enthusiasm by singing I belong to you at the top of my lungs. The judge, who presented the new single in the evening state crisis and replayed the hits Nice story And Tastewarmed up the atmosphere together with Rkomion stage with Sea that you are not, Do you want a hand And Unsurpassedit’s at Dargen D’Amicowhich sparked viewers with French fries, Drunk on you And How to dance. The super guests of the last episode, the Meduza and the Nuclear Tactical Penguinsthen unleashed the public already inflamed by the performances of the competitors.