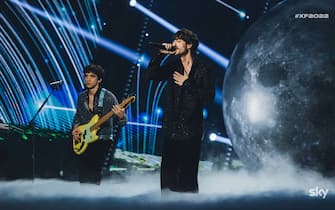 Rkomi’s Roster musical duo is in the finals. To give life to the French Saints are Alessandro De Santis (lead vocals, guitar and ukulele) and Mario Francese (backing vocals, keyboards, synthesizer and electric bass), who propose their “colored cynicism” in music.

X Factor 2022, Semifinal: the Omini eliminated. Here are the finalists

The French Saints, right from the start, struck the judges for theirs originality and at the Bootcamps they offer a cover of “Un boy on the street” by I Corvi. Live earn them thanks to their very personal version of “What a fantastic story is life” by Antonello Venditti.

X Factor, the French Saints sing I want you by Ornella Vanoni. VIDEO

The French Saints already have an album and many concerts active, so much so that in 2022 their single “Giovani Favolosi” is included in the soundtrack of the third season of “Summertime”. “It’s not that bad” it is the new product they produced together with Katoo, a hymn to emotion and the ability to abandon oneself to art.

X Factor 2022, It’s not that bad is the unreleased French Saints

The French Saints pass the Semifinal thanks to duet with Coma Cose on “Flames in the eyes” and the reinterpretation of “When you were young” by The Killers.

It has the “black belt of performer”, Beatrice Quinta, who flies to the final. Born in Palermo in 1999, she brings an ironic and seductive pop style to the stage. Bea writes and sings her own songs and collaborates as a songwriter with other artists, writing top lines for different DJs all over Europe.

Live X Factor 2022, the semifinal with the duets: guests and assignments

Beatrice Quinta, born Beatrice Maria Visconti, is on Dargen D’Amico’s roster who was convinced of her talent after listening to her sing (even a capella) a cover of “Il cielo” by Renato Zero.

X Factor 2022, the wait for the competitors before the fifth Live Show

Bea has shown that she knows how to hold the stage even in front of a sacred monster of music like Morgan. The competitor during the Semifinal duet with the frontman of Bluvertigo on the notes of “The crisis” and gave the audience a real show. For the second round, Bea wants to transform her show into her concert and tries it with a sung and ballad version of Marco Ferradini’s “Teorema”.

X Factor 2022, Se$$o is the unpublished by Beatrice Quinta

Final for 19-year-old Linda Riverditi. Her performances were a riot of emotions and sounds, it is no coincidence that Fedez wanted her in his roster from the very beginning. Impossible not to fly with her during every performance of hers.

X Factor, a fourth Live of news: unpublished songs, rankings and Cattelan on stage. The podcast

At the Auditions Linda enchants and breaks the ice with a Måneskin cover performed on the piano, “Coraline”. At the Bootcamps he amazes with “Rootless Tree” by Damien Rice and conquers everyone with “Skinny Love” by Bon Iver at the Last Call.

“Fiori Sui Balconi” is Linda’s unpublished work. The song (written by: Duccio Caponi, Pietro Serafini, Iacopo Sinigaglia, Jacopo Adamo – Production by: BRAIL, JxN of BNKR44), is a question mark on love in which the sound of the piano merges with electronics.

The interpretation of “It’s important to me” proposed by Linda feat. Federico Zampaglione of the Tiromancinos to the Semifinal. The artist earns the final of X Factor also thanks to the intense cover of “Waves” by Dean Lewles.

They passed one ballot after another, until they reached the final. The Tropea of ​​Ambra’s Roster were born in 2017 from contaminations ranging from the alternatives of the 2000s, to the postpunk of the early 80s, to the beat of the 60s.

Tropea proved convincing singing both in English and in Italian. Loved their cover of “Together with you I’m fine” by Lucio Battisti proposed at the Bootcamps, as well as “Let Me Entertain You” by Robbie Williams at the last selection stage.

“Cringe Inferno” is the unpublished by Tropea, a piece brought on stage for the first time at MiAmi 2019 (written by: Domenico Finizio, Claudio Damiano, Lorenzo Pisoni, Pietro Selvini – Production by: Simon Says!).

In the semi-final the Tropea rocks. The 1982 song “Lamette” takes on new life on the X Factor Italia stage thanks to the encounter between the Rector’s talent and the band’s arrangement. Also convincing in the production of “Qualcosa di grande” by Lunapop, a cover proposed in the second round of the competition.

The X Factor “highlanders,” they call them. They are the Tropeas, survivors of another ballot. At the end of the semi-final the competitors with the least votes are the Omini and the Tropea. The bands compete head-to-head to the last battle horse and the Ambra Roster group chooses to sing “Asilo Republic” by Vasco Rossi, who had brought them luck in the previous ballot.

X Factor 2022, Semifinal: the Omini eliminated. Here are the finalists

The Omini, from Fedez’s roster, are excluded from the final. The trio composed by Julian Loggia, on bass and vocals, Zak Loggia, on guitar and backing vocals, and Mattia Fratucelli on drums at X Factor 2022 presents the unreleased “Matto”, written by Andrea Appino, Fabrizio Pagni – Production of BRAIL , Gianmarco Manilardi, a rock song that reflects a romantic vision of madness.

During the Semifinal they first sing the famous “Charlie surfs” together with the indie rock band Baustellethen “Song2” by Blur.

Go to the SPECIAL

Linda, Santi Francesi, Beatrice Quinta and Tropea are the finalists of X Factor 2022.
Appointment with the final on Thursday 8 December at 21.15 on Sky Uno and streaming on NOW.