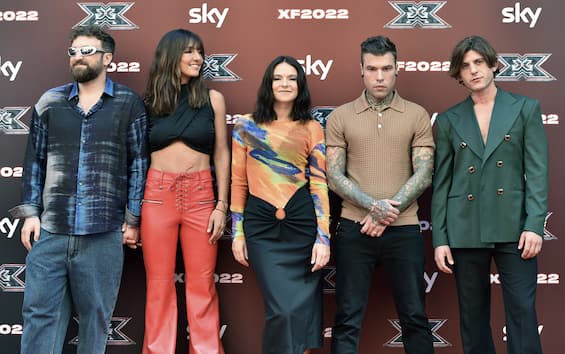 The Milanese press conference opens the dance and formalizes the departure of the most anticipated musical talent show of the year. On stage, in addition to the judges and the new host, the protagonists who at X Factor (THE SPECIAL) work to make everything work perfectly, in a season that welcomes and celebrates with immense enthusiasm the return to normality, after two years of pandemic. As Antonella d’Errico (Executive Vice President Programming of Sky Italia) tells us. “X Factor is our flagship entertainment program, subject more than others to the need for continuous transformation, impacted by the social context. The last two years have been marked by the pandemic and the lockdown and the last two editions have tried to represent this type of mood. We work for a whole year on X Factor and we felt the collective need for one Grand openingwith this in mind we have decided to overturn it. In addition to having reopened the program to the public, we focus on entertainment, fun and the desire for lightness“.

Great is the expectation to see it at work Francesca Michielin which together with Fedez best represents the will of the talent of “refound itself from its roots“. The artist accepted without hesitation her new role as conductor, “although we had already taken her, she still wanted to audition, she is the right person”, Antonella d’Errico points out. The former winner who, a decade after her victory, returns to where it all began, to close and reopen a circle, she is not in her skin: “I am very happy, I feel a very strong emotion, it seems to me to relive what I lived in its time, ten years have passed but the X Factor stage always makes you shiver. I think it’s great to see so much talent this year. I get very excited and I disagree, I get hurt if they eliminate someone. I have a great team ”.

Fedez: “I was waiting for this moment, I have always experienced my departure from the program in a traumatic way. As soon as the terrain was favorable, I did not hesitate. A great challenge awaits us and without being too superstitious, I say that I strongly believe in this project. X Factor baptized me from a television point of view, it was an important training ship for me. I will enjoy the moment without preparing too much, as I did in previous years, this is the big difference that I carry with me. This year I will be free! ”.

Amber: “They always call me for impossible feats, maybe this one is, I don’t know. I auditioned and incredibly they told me yes, I am used to doing badly if put to the test (my career is all the no that they told me), I managed to take this place and I start with a yes. TV is not something I’ve ever forgotten, it’s just that I had nothing to say and XF seemed like a pretty risky experience, right for me. I have done many things in my life, but I believe that the X of X Factor I will have it tattooed ”.

Rkomi: “I am very emotional and I want to experience it as a new beginning. Despite the emotion, I want to try to be as myself as possible. The team is really strong, I want to do well and in the boys I try to get naked. For me this was the key, I look for a language, I will never discard anything, if heard. I want determination, as in life “.

Dargen: “When I signed the contract I was convinced there were the judges of the last edition (laughs and makes you smile, ed); in fact there have been strong doubts from the production and I hope to make them repent as late as possible. I would never have bet on myself, and it’s nice to find someone who does. My focus is on music and working with artists. And then … what better opportunity is this to give the worst of me? “.

X Factor 2022Sky Original show produced by Fremantle, changes all its faces: the table of judges resides – 4 years after the last time – Fedez, appeared in his five editions competent and ambitious, with a style that has left its mark, empathetic with the talents in the competition and passionate about the path of his children; and then the debuts, in the role of judges, of Ambra Angiolini, actress, television and radio presenter, singer, capable of ranging between genres, means of communication and the most varied languages, in the world of entertainment for thirty years constantly on the crest of the wave; from Dargen D’Amico, one of the most eclectic and poetic representatives of the contemporary songwriting scene in his multiple roles as rapper, songwriter and music producer; and of Rkomi, one of the most appreciated and successful artists of the new Italian generation, fresh from the triumphs of his latest works that have broken all previous records. In conduction arrives Francesca Michielin who, 10 years after his victory on that same stage and after a multifaceted and original journey, returns to where it all started in a (still) different guise.

The competition between them will be very hot right from the start, right from the Auditions. And it will be more lively and exciting than ever for the duration of the selections, during which, behind the table, the audience will sit back in attendance: 12 thousand total spectators inside the Allianz Cloud in Milan, in fact, which will be in all respects “fifth judge”Of the competition, because with their applause, more or less deafening, and with their disappointment, more or less noisy, they will make the judges understand their will, accompanying their choices, sometimes even conditioning them.

For the first time in the history of X Factor, the public will accompany the judges from the very first plays to the choice of the 3 members of each team. The choice that the four judges will have to make this year will therefore be even more charged with tension, not only because the spectators in the stands of the Allianz Cloud will make the judges hear their opinion in real time, but also because the Last Call phase in this new season will be all new.

After the traditional Audition (15, 22 and 29 September, always on Sky and NOW), in which the artists will perform and present their musical project with the hope of receiving at least 3 yeses as always to be able to continue, the Bootcamp (6 and 13 October), with the classic and electrifying mechanism of the switches on the coveted and coveted chairs (which this year will be 6).

Then, on October 20, the unprecedented phase of Last Call in which this year’s mechanism foresees that the 6 chairs and the judges return to the stage, listening to all the contenders of their own rostercan therefore choose the trio they want to bring to Live Show. The latter will start from 27 October, from Repower Theater of Assagoon the outskirts of Milan.

There will be one at the Auditions great variety of genres. Pop will be the master in all its declinations and contaminations, with electronic atmospheres and other more intimate moments thanks to guys who will arrive accompanied by grand pianos and guitar arpeggios. Many artists will present themselves with unreleased songs but there will also be songs – in many cases great classics of Italian music – proposed as covers; the bands will bring all the colors of rock and indie-pop with them to the stage, the r’n’b share will be represented above all by women and, finally, there will also be a pinch of lyric.

The judges will discover the roster of artists that the musical commission of X Factor 2022 will have assigned to him before the Bootcamps. In fact, the absence of the subdivision into traditional categories: among the boys in the competition there will be no division by categories of sex, age and musical formation, and the 4 judges will have the opportunity to lead heterogeneous teams, composed of both soloists and bands (they will have, as the only rule, the obligation to bring at least one band and at least one soloist with them to the Live Shows), through a method of assigning and choosing the 12 finalists focused exclusively on the musical proposal and artistic planning. The goal for everyone remains to represent all the music, in a broad, fluid and varied way.

The appointment, therefore, for the start of X Factor 2022 is set for Thursday September 15th at 9.15pm on Sky Uno and streaming on NOW, always available on demand And visible on Sky Go.

3 episodes of Auditions, 2 of Bootcamp and one for Last Call they will open an unprecedented, surprising and exciting edition, waiting for the Live departures from 27 October.