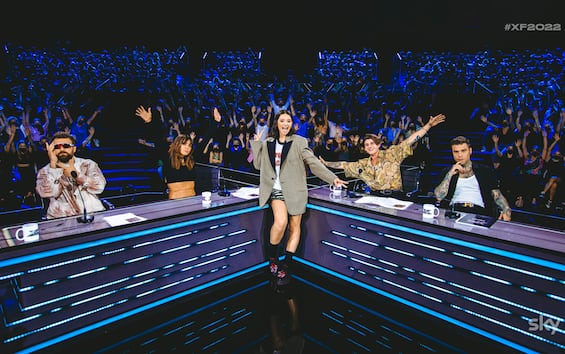 Ribbon cutting for the new edition of X Factor 2022 (THE SPECIAL) which kicked off yesterday with the first episode of Audition. The debut of the new season, yesterday on Sky Uno / + 1 and on demand, has recorded 790 thousand average spectators with a share of 3.9% (+ 5% compared to last season’s debut). On social media, thanks to 296 thousand total interactions in linear detection, # XF2022 is most commented show of the entire television day yesterday; on a continuous basis, however, with 329 thousand interactions X Factor ranks as first content of the day (sources: Talkwalker, Trends24.in).

the new faces and the Return of the public

All new faces of the Sky Original produced by Fremantle: conducting debut for Francesca Michielin, 10 years after her victory on that same stage and after a multifaceted and original journey, which has returned to where it all started in a (still) different guise; debut also for the unprecedented jury formed by Fedezback at the table after 4 years, Ambra Angiolini, Dargen D’Amico And Rkomi. A return also for the public, who filled the stands of the Allianz Cloud in Milan and accompanied the performances of the many young people paraded on stage.

the talents on stage

They are the absolute protagonists of the evening, the many artists who have begun to make themselves known by judges and the public, all with the hope of conquering one of the 12 places available for the Live Show, expected from 27 October. Here they are, therefore, the first judgments at the table: among others, they have obtained access to the next step, the Bootcamps, the Living room tigers4 Roman boys who proposed “Before going away” by Neffa, the 22-year-old Prim from Scandiano (Reggio Emilia) who sang “Youth” by Daughter, the 17-year-old from Gela Holy Francisco with her unreleased super catchy “Martina”, the 21-year-old Bolognese of Moroccan origins But in with Kanye West’s “New Body”. And again, she promoted the touching performance of Linda Riverditi on the notes of “Coraline” by Måneskin, the super rock one by Little men – 3 very young Turinese aged 18, 19 and 19 – with “Tick, Tick … Boom!” of The Hives, the sophisticated one of the Milanese duo of French Saints with his unpublished “It’s not so bad” and the more emotional one of Matteo Siffredi20 years old from the province of Savona recently in Milan, with “The appointment”, a classic by Ornella Vanoni.