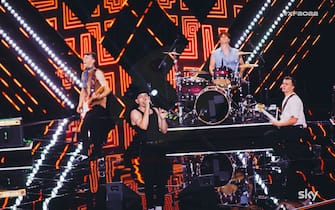 Finally the curtain opens on the new XF2022 edition and it is a band to break the ice in the first episode of Audition. The first competitors are called Living Tigers and take home 4 yes. Their reinterpretation of Neffa’s song hit the spot, Ambra likes them because ‘strange’

X Factor 2022, starting tonight: where to see it and how to follow cast and competitors

The second competitor on the stage of XF2022 defines herself as a basic bitch, and responds to the name of Irene Pignatti. She the daughter of musicians, she not only passes the turn with 4 yes, but she collects the first standing ovation of the show. For Dargen it is ‘an example of how to make a cover, keeping the essence of the song’. Meanwhile, backstage, she confesses to the presenter that she is a fan of her unleashed by her. And go with the selfie!

X Factor 2022, we’re off tonight. Music at the center of everything

Even Francesco Guarnera convinces the judges with 4 yes, who at the age of 16 made his debut on stage with his unpublished Martina, a girl who made him suffer a little. While the mother cries behind the scenes, the audience already intones the piece of her. For Fedez ‘la di lui is a simple melodic writing which in jargon is called hit’. Next

Francesco Santo, student in physics in Bologna, wins 4 yeses. His unpublished ‘How much do you have sex with me’ convinces the jury amused. And it thrills Rkomi, making her jury debut

And between emotions and curtains between the judges, on the stage of XF2022 it is the turn of the band Attack The Sun that unleashes on the notes of the song Red eye and collects the consent of the judges

For the performance of Caterina Lillo there are 3 yeses and the no of Dargen who dissociates himself from the unanimous opinion of his fellow judges. Rkomi is very attentive to the decisions he makes, and in the singer he sees all the character and the desire necessary to move forward

The young Manal Harchiche also divides the jury that votes with 3 yes and one no (that of Fedez). The Moroccan-born singer whose name means ‘success’ sings a song by Kanye West that is not appreciated. For Dargen: ‘The piece is very wrong, but you are right’. And the shift passes

And after the competitor from Bologna it’s up to the Atwood band to perform. On the notes of the song (revisited) ‘Bury a friend’ by Billie Eilish the boys are not convincing, in particular Fedez reproaches them for the choice of the artist, ‘the melancholy vein and the groove were missing’

Unfortunately, and to his great disappointment, even for Daphne Chancellor, the 3 yeses necessary to pass the round arrive, the goal of breaking has not been achieved. Fedez also recalls that taking Adele to the Auditions ‘is a suicidal choice’. Goodbye race

On the other hand, the one who convinces with 4 yeses bringing home the second standing ovation of the evening is Linda. The aspiring pop star needs ‘a self-esteem booster’, she arrives accompanied by her mother, sings Coraline by Maneskin and moves. For Rkomi we are facing ‘a beautiful volcano’, for Fedez the girl is not only good, but she has ‘the right artistic maturity’. And the compliments also come from Francesca Michielin behind the scenes

The Omini arrive in white dressed directly from Turin, all three sons of musicians bring home 4 yeses with Tick tick boom. For Fedez it is already yes from the first notes, Dargen appreciates ‘dirty rock without too many frills, I already feel like a fan of yours’. For the audience it is a standing ovation.

And after the Omini, to break into the show are ‘The Ferragnez’, to quote Dargen. Fedez runs backstage where Chiara Ferragni and little Vittoria are waiting for him. Short break and it is the turn of the French Saints from Milan with their piece ‘Not so bad’. For Ambra: ‘Getting angry about pop is new, I liked you a lot’. The duo has very clear ideas and passes with 4 yes

There are those on stage who risk bringing the cover of one of the four judges: this is the case of Alessandro Baroni with ‘Ama noi’ by Dargen D’Amico who in the end he appreciates. ‘I confess that I would never have thought of being a judge of XF and even hearing a song of mine sung by another person … I liked it’. And yes, there are 4

What makes you smile on the stage of XF2022 is the sympathy and poetry of Diego Ponessa, the singer comes from a small village in Lecco defining his a ‘motivational music’. Despite him he does not pass the turn, but receives the warmth of the public and the encouragement of the jury

Only one yes (that of Fedez) for the band The Clan who performs on the notes of Achille Lauro’s Rolls Royce. Dargen appreciates sincerity, but that’s a no. Hi guys

Disappointment also for the duo Luci Blu who perform with the song “Waiting for the sun” by Neffa, mixed with “For an hour of love” by Matia Bazar. The two competitors return home collecting 3 no and only one yes, once again that of Fedez

From Catania to Vicenza to the XF stage with an intense story to tell, the STT brothers bring the song ‘Oh mama’ to the judges. ‘This unpublished is about when we were evicted and housed in a cellar’. Fedez does not hold back his tears and is moved by the truth of the words. For Amber: ‘There is no need to do anything but what you have done’. There are 4 yeses that dissolve in a touching and very long embrace between the two competing talents

Matteo Siffredi dares to bring a historical piece by Vanoni, and in the hope of ‘not destroying it’ he offers all of himself, the interpretation is creepy. The young man passes the turn with 4 yeses on the notes of ‘The appointment’. Ambra is ecstatic: ‘In my opinion Ornella is calling you on your cell phone, you respected everything without respecting anything, bravo!’.

The competitor Giovanni Portaluppi also won the jury on the notes of the piece ‘Nihilism’. The aspiring pop star left with the aim of convincing Ambra and succeeded in the enterprise. ‘I liked everything about him,’ she comments

And to pass the turn is also the music of Francesco Giuliani that excites, more than all Ambra

Guitar in hand, Francesco Colaiemma wins 3 yes, and collapses from the emotion supported by the heartfelt embrace of Ambra who gets up from the jury table to go to meet him

The first episode of XF2022 is about to end on the notes of the band Nervi who brings a cover by Patty Pravo (same choice as Dargen in Sanremo). Young people win 3 yes, but not the consent of D’amico himself according to whom the song lacks sensuality

To close the first episode of XF2022 is the standing ovation for Lucrezia Maria Fioritti who moved to Milan for the love of music. The audience is in raptures while Ambra does not hold back the tears of emotion. For Fedez the young woman has generated ‘my third thrill that comes to me here at the Auditions’. And with these last 4 yes, X Factor greets you and awaits you for the second exciting episode, next Thursday, again on Sky