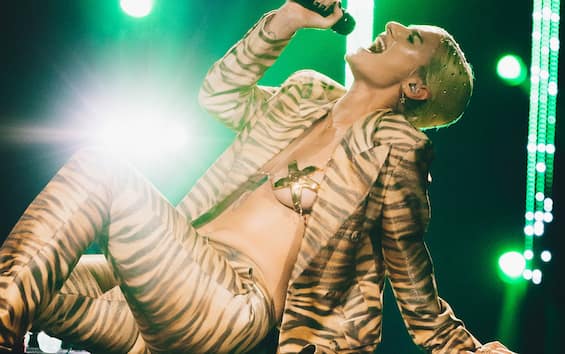 In the first heat of the semifinal (RELIVE THE LIVE) the competitors in the race had the opportunity to duet with some great artists of the Italian music scene, Beatrice Quinta got Morgan. The singer-songwriter, musician, composer who, first with his Bluvertigos, and then as a soloist, marked a golden age of Italian music, has returned to X Factor after his participation in the second Live Show – and after his over 50 concerts in 2022 solo and with orchestra in the most important Italian cultural festivals. The result was a blockbuster (VIDEO).

the duet of Beatrice Quinta with morgan

It is on the notes of The crisis by Bluvertigo, one of the most current Italian songs ever (for Rkomi “one of the coolest pieces of Italian song”), which the competitor from Palermo in the Dargen Roster performed with Morgan. A rousing performance, to say the least. In the center a piano and all around the talent of two artists who have been able to give a real show. And it is Marco Castoldi himself who compliments Bea before leaving the scene: “Beatrice is certainly much better than me. She not only sings well, but she has the right attitude”.

Amber: “You’re alive by a miracle, you made it bad tonight, you’re a black belt in performance”.

Rkomi: “Congratulations, bravo, one of the coolest pieces of the Italian song, everything happened on stage, very crazy as I like it”.

Fedez: “The problem with dueting with Morgan is that he takes the stage, you were good, you stood up to him. Truly congratulations”.

Dargen: “You can put her on stage with Morgan and with anyone else, she rules, governs, dominates and puts on a show”.

In the second round, Beatrice transforms the show into her concert, re-conquering everyone with a sung and ballad version of Theorem by Marco Ferradini e flies to the final together with Linda, Santi Francesi and Tropea.