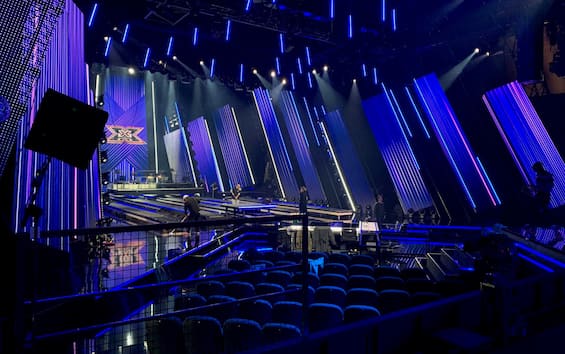 After the fibrillating evening of the unpublished (not to be missed on Spotify under the heading “X Factor Mixtape 2022”) last Thursday, we have reached the fifth Live of XF2022. Double heats tonight with a lot of (dreaded) carousel, orchestra and double elimination. The first of the two sore points comes immediately after the medley that sees the finalists perform seamlessly with the most representative songs of their journey: one out immediately (the least voted). And the race continues for the six talents who will become five at the end of the evening. No discounts, maximum tension and maximum concentration. The moment is topical, it can be perceived from the stolen glances behind the stage a few hours before the start of the show. We have been behind the scenes with the French Saints, the Omini, the Disco Club Paradiso, Beatrice Quinta, Joėlle, the Tropea and Lindawe interviewed them, leaving them the floor. Here’s what they told us about waiting before going on stage, about their fears and more.


RELIVE THE LAST EPISODE WITH THE PODCAST

How are you coping with the wait?

French saints: “Compared to the others, this is a complicated and full of anxiety wait, there is a very difficult orchestral round I had no voice until yesterday, there is certainly tension, but concentration and focus only on the performances”. For Mario who doesn’t sing, the situation is always this: “I’m calm up until a few moments before going up, the fifteen minutes before instead are in full flame. I can’t describe it, I forget everything I have to do, I don’t think about anything anymore, then as soon as I get on, I recover”.
Disco Club Paradise: “Waiting is exhausting, but it depends, it’s always a game you play with yourself in the sense that you have to be able to divert your thoughts to the right places. It can go right or wrong: the important thing is to focus on what’s right. Our strength is that we are all together and at least one of us is on the right frequency and we stick to him”.
Tropea: “There are various types of waiting, the one before going on stage is the one most dense with adrenaline and ‘go to the bathroom’”.
little men: “Anxiety is palpable in the air, tonight there is a double elimination and all the trepidation is normal, but we are pumped and gassed as always”.
Linda: “Waiting is scarier than the stage, every Thursday you have high expectations of yourself, but when you get on stage you go to feeling and you don’t care about everything”.
Beatrice: “I focus a lot, I focus my soul and my brain on stage, I enter a state of self-induced hypnosis, I live it paradoxically well: I feel the pressure a lot and I like feeling it. The idea of ​​performing in front of an audience puts me in a state of war in a good way, this is the kind of adrenaline I have chosen as my drug in life”.
Joelle: “I feel calm when I’m on stage, first I yawn a lot and release tension, but a few seconds before I calm down, it helps me to talk to others, or vocalize”.

How did you prepare for the heat with the orchestra?


French saints: ”We rehearsed the songs over and over, never thinking about the double elimination and the pain that could have followed no matter what. And focus on performances, preparation is the same every week. The fear is related to the quality of my performance and I haven’t been well for a few days.”
Disco Club Paradise: “We prepared in two different ways, in the first heat we did I will go up, it’s a song that we like to do, it amuses us, and being a carousel we wanted to do it. With Crazy Heartin the second, we go beyond ourselves, we put our heart into it in a different way, and with the orchestra we experience other sounds, it’s a new world in which we can’t wait to get to know each other”.
Tropea: “We prepared ourselves with Asylum Republic by Vasco Rossi that we offer you in a more charged version than the previous one already done, for the second run we have the honor of having the orchestra on stage and we will make our own interpretation of Song to Say Goodbye dei Placebo, we will put in a lot of melancholy and a lot of emotion. We are more afraid of the carousel, but even if it were to end now, we will still be happy to have come this far”.
Little men: “The only thing that worries us is the elimination and we can’t wait to let you hear the piece with the orchestra, it’s part of our background, we’ve been in the rehearsal room a lot, but then on stage it’s something else ” .
Linda: “Unfortunately, I’ve had a bad inflammation of my vocal cords for a couple of days and I hope tonight I’ll be able to sing well, mentally I’ve been preparing for about ten days now, and playing with the orchestra is a dream come true for me”.
Beatrice: “I had like twelve mental breakdowns for the orchestral piece because it’s very difficult even emotionally, I’m a control freak and I get super intense in everything I do, Dargen knows it and they have to make him a saint after this program”.
Joelle: “I particularly want to get to play with the orchestra, I have prepared a lot, the song is by Elisa, she wrote it for her little girl and tonight I would like to sing it as if I were my mother’s mother. She is a very important person to me, I have always mentioned my father and my brother, I want to make the most of this song”.

A quality of your judge that you take home

French Saints: “His humanity, I could talk for hours about how human Mirko was with us, we already realized it at Bootcamps, he turned out to be an incredible person, we didn’t expect him, he was very close to us and he was with everyone”.
Disco Club Paradise: ”It’s that if you have to exaggerate you have to do it extremely, in short, if you have to do it, you have to do it to the max, or you suck and you suck or rock and give your best. We certainly take this advice home too, we feel it a lot in our mood”.

Tropea: “Sensitivity and humanity, and let’s also add professionalism”.
Little men: “Fedez is very good with us, he always manages to give us the right advice, he reassures us, he makes us feel calm, giving us the right boost to make us face the Live “.
Linda: “The ability to have a futuristic and objective vision that Federico has, the commitment that leads us to lend on everything we do“.
Beatrice: “It has too many. He is patient, sensitive, tolerant, he is free and it is not easy to find the desire to be free in a human being ”.
Joelle: “I’m thinking of the most beautiful one, there are many, perhaps being even more sincere and spontaneous, in the judgments he gives he always tries to see the positive”.

How do you imagine the final?

French Saints: “Ask. I imagine a giant place, fireworks, giant things. Even if I never thought about it in terms of image”. Mario: “I didn’t expect anything, I didn’t expect to get this far and I’m already happy like this”.
Disco Club Paradise: “With a lot of people, in a much bigger place (if I’m not mistaken), with the magic of live, but it’s not a right goal to think about now, we prefer to stay in the here and now. Let’s say that until you get there it’s hard to imagine it”.
Tropea: “We imagine it at the Forum, there will be a huge choreography work, the unreleased songs will be re-proposed and I expect to have a beautiful seat in the grandstand to enjoy it”.
little men: “We imagine it as a big party and we hope to be there”.
Linda: “I don’t know why but I have the image of red, if you say final I see red, and it makes me feel proud. If I were to get there, it would be crazy.”
Beatrice: “For superstition I don’t want to imagine the final, but now that you make me think about it, I imagine her in the audience, together with Dargen with a duet, we go out in super tight onesie and present porno chic things just to annoy. At that point I may as well go home. My goal is to get to the Forum, I decided it when I was 14 when I went to the Thirty Seconds to Mars concert, I wanted to throw myself in the stands and I told my cousin Luigi that one day I would play there”.
Joelle: “Obviously I’d like to be there (knock wood, ed), and even if I don’t get there, it doesn’t end here, this is just the beginning of a journey. In any case, I imagine bringing Joėlle on stage and not just Giorgia. I would like to reach not only the heart, but also the eyes of people. I don’t aim to win but to reach the final”.