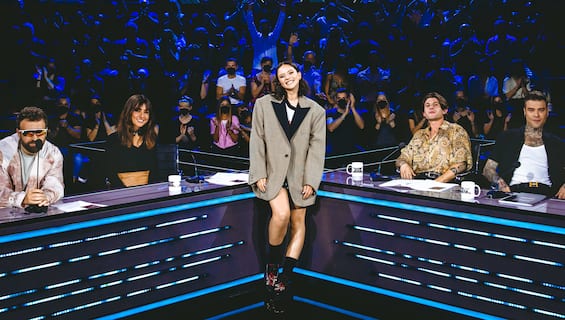 It is the last call to access the Live Show from X Factor 2022 (WATCH THE SPECIAL)the last obstacle before having the certainty of being able to tread the stage of Live. Thursday 20 October, on Sky and streaming on NOWthe Last Callthe final step of the selections in which the judges Fedez, Ambra Angiolini, Dargen D’Amico And Rkomi they decide who is in and who is out, and there is no appeal. Backstage, to collect the hot comments of judges and artists, as well as to mark the times of this crucial phase, Francesca Michielin. For the first time in the history of X Factorthe judges will have to make these tough choices in front of the public of the Allianz Cloud in Milan: the “fifth judge” of the program, the Sky Original show produced by Fremantle, will observe the behavior of the judges and comment with whistles and applause on the decisive choices that will be made at the table. But that’s not all: for the first time each judge will make their own decisive selection in front of his colleagues not busy at the table, who will watch what is happening in the studio and express their opinions from a room in the backstage. From this moment, therefore, the four judges officially become “opponents” and play with their cards exposednot only in the choice of the artists of their team but also in the judgments given on the other judges, on the other teams and on their components.

The mechanism for identifying the artists competing this year is unprecedented: each judge will find the 6 artists promoted during their Bootcamp, who will once again be seated at the chairs they craved so much during the previous step. All six will perform, and it will be up to their judge to decide, from time to time, whether they can hold the chair if they have to get off the stage. At the end of Last Call, therefore, each of the four will have on stage only the trio that will officially make up their team, the three artists with whom they will arrive at the Live Show expected every Thursday, again on Sky and NOW, starting from 27 October.

Fedez arrives at the Last Call with Filippo Ricchiardi (aka Fil Ricchiardi), 21 years old born in Turin and now in Halifax, Canada; Marco Zaninitwenty-year-old Milanese student; Wiem, a twenty-year-old bartender from Desenzano del Garda of Moroccan origin; Gaia Eleonora Cipollaro (Dada), 26-year-old Neapolitan artist and educator; Linda Riverditi, 19 year old student from Alba (Cuneo). In the team there are also the Little menthree boys between 18 and 19 years from the province of Turin admitted by right to Live Shows as the only band on his roster.

With Ambra Angiolini there will be Cecilia Quaranta (Cutting), 23-year-old musician from Jesi (Ancona); Matteo Siffredi, 20 years old from Villanova D’Albenga (Savona) and now in Milan; the Nerves, four boys between 26 and 29 from Florence; Francesca Rigoni (Winter), a 26-year-old social media manager from Arzignano, (Vicenza); the Tropea, four musicians, boys between 26 and 32, from Milan; And Lucrezia Maria Fioritti26 year old from Bologna who moved to Milan.

Dargen D’Amicoin his Bootcamp, promoted Irene Pignatti (Prim), 22 years old from Scandiano (Reggio Emilia); Martina Baldaccini (Marla), 27 year old street artist originally from Carbonia and now in Rome; Beatrice Maria Visconti (aka Beatrice Quinta), 23 years old from Palermo who moved to Milan a few years ago; the 25 year old Roman Matteo Orsi, student; the singing teacher Cinzia Zaccaroni, 34 years old from Crevalcore (Bologna). With Dargen there are also the Disco Club Paradisofour boys between 20 and 22 years old from Bologna, also already with the Live ticket in their pocket, being the only band promoted in the team.

Rkomiinstead, he will have to choose his trio between Delì Lin, 18 year old from Preganziol (Treviso) of Chinese origins; Manal Harchiche (But in), 21-year-old Bolognese of Moroccan origins; the band The violet end, three students, boys from the province of Lucca, between 17 and 20 years old; Jacopo Rossetto (aka Iako), 26-year-old freelance music producer born in Vicenza and now in Milan; the Milanese duo French Saints, two boys aged 23 and 24 from Milan; and Giorgia Turcato (Didì), a 20-year-old student from Lendinara, in the province of Rovigo.

The appointment, therefore, for the episode of the Last Call of X Factor 2022 is set for Thursday 20 October at 9.15 pm on Sky Uno and streaming on NOW, always available on demand and visible on Sky Go.

And starting the next day, Monday to Friday at 7.30pm – again on Sky Uno and streaming on NOW, also available on demand – the Daily from # XF2022, a daily appointment to find out all the details of the competitors’ path. A journey behind the scenes of the show between assignments and rehearsals of the songs, interviews and backstage, but also the day-to-day life of the artists in the competition – who from this year return to live together in the Loft – under the supervision of their judges.

The appointment of the prime time of X Factor 2022 is also unencrypted on TV8to button 8 on the remote control, every Wednesday in the early evening.

The program was carried out in full compliance with the legislation relating to the containment measures of the infection from SARS-CoV-2 in the workplace and the directives provided for by the shared Protocol for the protection of workers in the cinema-audiovisual sector of 07/07/2020 .

X FACTOR 2022: every Thursday at 9.15 pm on Sky Uno and streaming on NOW, always available on demand and visible on Sky Go.

Free on TV8, at button 8 on the remote control, every Wednesday in prime time.

X FACTOR 2022 – DAILY: from 21 October every day from Monday to Friday at 19:30 on Sky Uno and streaming on NOW, also available on demand and visible on Sky Go.