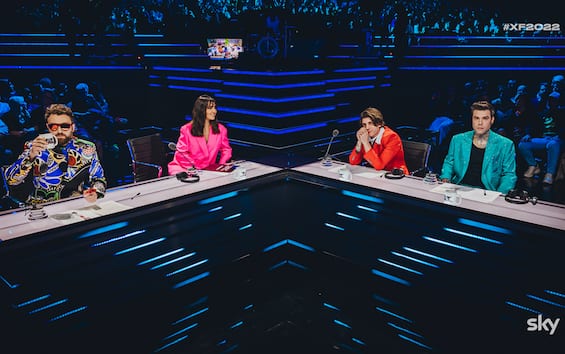 It has been a long musical and human journey, full of emotions and surprises. A journey that began with the very strict selection of the Auditions and continued with the challenges of the Lives on the X Factor 2022 stage (THE SPECIAL). Now there are four left to contend for the final victory of #XF2022: I am Beatrice Quinta, LINDA, FRENCH SAINTS And Tropea. They will compete on one of the most important stages for music in Italy, the coveted Mediolanum Forum of Assagofor the last fight of this edition, which will happen Thursday 8 December at 21.15 on Sky and streaming on NOW, simulcast free-to-air on TV8.

Alongside the four finalists, in a situation of perfect balancethe judges of #XF2022, who arrive at this last night with one contestant each: Beatrice Quinta with Dargen D’AmicoLINDA with FedezFRENCH SAINTS with Rkomi and Tropea with Amber Angiolini. The winner of this edition of the Sky Original show produced by Fremantle will be proclaimed Francesca Michielin, this year’s presenter, who will hold the reins of an exciting evening, a ride that will lead to the announcement of the winner. Guests of the final on the Mediolanum Forum stage will be i Nuclear Tactical Penguins hey Meduza.

the heats of the evening

The evening will be divided into 3 heats, and at the end of each of them the competitor with the least votes from the public will have to abandon the race. The first run will develop with 4 extraordinary duetsand will feature i finalist competitors each flanked by Francesca Michielin; the second will be the Best Of, in which the three artists remaining in the competition will be able to perform a medley of the songs they have presented during these weeks; the last heat, the The finalwill be dedicated to unpublished presented by the two singers still in the game, and among these the public will choose the winner of X Factor 2022. To intersperse the tension of the competition, there will be the performances of all 4 judges and Francesca, with a series of special performances designed for the Finale stage. Fedez will present a preview of his new single entitled “state crisis”, out right after the final, at midnight.

the finalists in the competition

Beatrice Quintafrom the Dargen D’Amico roster, Sicilian born in 1999 amazed everyone right from the Auditions by presenting her unpublished “If$$or”, the starting point of a journey always poised between sensuality and irony, but with an overwhelming pop soul. Episode after episode he unleashed all his talent bringing, on the stage of #XF2022 and in his very personal way of making music, evergreens of Italian song such as “Fiori rosa, fiori di pesco” by Battisti and “Tutti my mistakes” by Subsonica until to the standing ovation of the semifinal with the cover of “Teorema” by Marco Ferradini.

LINDA, from the Fedez roster, just nineteen, originally from Alba, has been able to enchant the public and judges with her voice and a great passion for music which, as she herself said, her mother passed on to her thanks to the songs of Queen. Since the Auditions she has been able to impress and capture the attention of her judge Fedez who, after listening to her cover of Måneskin’s “Coraline”, wanted her with him in the team. During the program she was the protagonist of a highly emotional journey between the songs of great international artists such as Bon Iver and Snow Patrol and an intense and delicate new song entitled “Flowers on the balconies”.

FRENCH SAINTS, from the Rkomi roster, are the duo composed by Alessandro De Santis (lead vocals, guitar and ukulele) and Mario Francese (backing vocals, keyboards, synthesizer and electric bass). Their music offers a vision of the world in which reality is filtered by a “colored cynicism”, with a gaze in constant oscillation between the collective vital impulse and the need for self-isolation. AX Factor presented themselves in the selections with the unpublished “It’s not that bad”, immediately obtaining the unanimity of the judges. And during Live the unanimity always remained, with them confirming themselves week after week thanks to incredible performances, often completely rearranging songs like Radiohead’s “Creep”.

Tropea, from Amber’s roster, are the “Highlander” band of X Factor 2022: 5 ballots, all passed. Born in Milan in 2017, they are Lorenzo Pisoni (guitar), Domenico “Mimmo” Finizio (bass), Pietro Selvini (vocals) and Claudio Damiano (drums). The influences of their music range from 2000s alternative to early 80s postpunk to 60s beat. Through their songs they explore the subcultures of the internet, vulnerability, cringe and dreams, and it is no coincidence that their unpublished work is entitled “Cringe hell”. Their performances have often been explosive, from Verdena’s “Luna” to Vasco Rossi’s “Asilo Republic”: the latter piece guaranteed them passage to the final, during the semi-final (also concluded in the ballot), thanks to a incredible performance concluded by Pietro standing on the chairs of the Repower Theater, after a run that took him from the stage almost to the opposite side of the hall.

The four finalists, together with the other singers from the #XF2022 live shows, presented their original songs which are always available on the album X FACTOR MIXTAPE 2022 (Sony Music Italy) on all digital platforms. A musical journey to learn more about the projects of the competitors competing in this edition.

To fully experience the immediate eve of the final, from 20:20 on Sky Uno and streaming on NOW, and simulcast on TV8, Paula DiBenedetto will be at the helm of a special installment of AnteFactorthe appointment which, as per tradition, will tell all the emotions of the last minutes before the show live from the backstage.

the guests of the final

The energy of Nuclear Tactical Penguins arrives on the stage of X Factor 2022. The multi-platinum band has just returned to the scene with their highly anticipated new album “Fake News”, anticipated by the singles Giovani Wannabe (Triplo Platinum) and Ricordi (certified Platinum and for the seventh consecutive week first in the charts Earone). “Fake News” collects the last two years of the Nuclear Tactical Penguins in 14 tracks, after the successful Ep “AHIA!”. Decisive years, in which the six boys from Bergamo collected important certifications, first places on the radio and record numbers in every area, from streaming, over one billion, to live shows – with three hundred thousand tickets sold during the summer 2022 and ten dates in stadiums for 2023, which recorded two lightning sold outs in Rome and Milan – and prestigious awards, including the victory at the MTV European Music Awards as Best Italian Act.

And again, they will be on stage at the Mediolanum Forum i Meduza. After climbing the global charts with over 15 billion total streams and more than 900 million views on YouTube, conquering the ranking of the 20 most streamed albums of 2021 with “introducing MEDUZA”, MEDUZA – the most famous trio of Italian producers in the world composed by Mattia Vitale, Simone Giani and Luca De Gregorio – they return to make us dance. Record group of made in Italy house music, they have been able to establish themselves on the international scene by collecting over 135 platinum and diamond records. Their most recent single is “Bad Memories (feat. Elley Duhé & FAST BOY)”. In 2022 they conquered all the best dancefloors in the world with a huge global tour of over 70 dates.

X Factor is a program curated by Eliana Guerra.