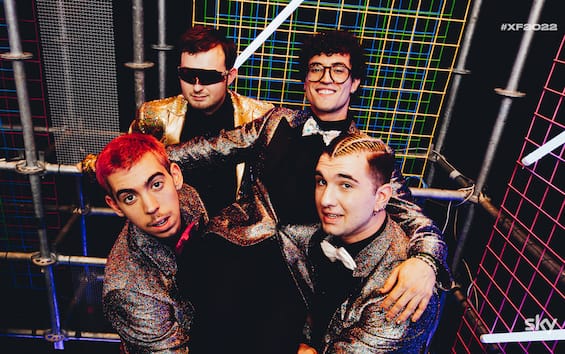 It’s the evening of the fifth live for X Factor 2022, the Sky Original show produced by Fremantle. For judges and contestants it will once again be a all-against-allat the decisive junction that will establish who will be the 5 semifinalists who will be able to play everything to access the final of the Mediolanum Forum.

After presenting their unpublished works live for the first time, now the challenge for the seven boys remaining in the competition becomes even more exciting: in the next appointment, awaited for Thursday 24 November at 21.15 on Sky and streaming on NOWthe artists will have to perform in two intense heats, each of which will lead to an elimination.

RELIVE THE LAST EPISODE WITH THE PODCAST

In the first heat, the moment of the beloved and spectacular X Factor “carousel” returns, a unique medley that will see them perform seamlessly with the most representative songs of their journey, and which will therefore lead to the first elimination of the evening. On the roster of Fedez, Linda will once again sing “Chasing Cars” by the Snow Patrol and the Omini “No Sleep Till’ Brooklyn” by the Beastie Boys; in that of Amber, Tropea return to unleash the public with their version of “Asilo Republic” by Vasco Rossi; in that of Dargen D’Amico, the Disco Club Paradiso will perform on the notes of “Salirò” by Daniele Silvestri and Beatrice Quinta will re-propose “Fiori rosa, fiori di pesco” by Lucio Battisti; finally, in that of Rkomi, the French Saints will play “Creep” by Radiohead and Joėlle “I’m with you” by Avril Lavigne. The six remaining singers will then be the protagonists of a second round characterized by the presence of aPhilharmonic orchestra of 30 elements that will accompany their performances. On the stage of Repower Theater thus a series of covers of timeless songs will come to life, such as “Running Up That Hillby Kate Bush (for Linda),Bitter Sweet Symphony” by The Verve (Omini), “Somebody That I Used To Knowby Gotye feat. Kimbra (French Saints), “A Poem For You Too (Life Goes On)” by Elisa (Joelle), “Song to Say Goodbye” of Placebo (Tropea), “Crazy Heart” by Little Tony (Disco Club Paradiso) and “Don’t Stop Believin’” by Journey (Beatrice Quinta).

Guests of the fifth live are Lazza and Rosa Linn

Lazza is the musical phenomenon of the year, rapper and pianist with over 33 platinum records and 35 gold records conquered. His latest album “SIRIO” is certified Triple Platinum Disc, has totaled over 600 million streams in total and has broken a monumental record of staying at #1 on the FIMI/GfK Album chart, with 17 weeks in first place, and is also , in the top 3 of the best-selling records in the first half of 2022. After having trod the stages of the most important summer clubs and festivals in Italy with his Sirio Tour, Lazza is continuing his triumphal journey around Europe with the LAZZA EUROPEAN TOUR, which started on November 19th.

Rosa Linn, the talented and very young artist competing in the Eurovision Song Contest 2022, is the most famous Armenian artist and producer of the moment. His latest hit “Snap” went Platinum in Italy and has over half a billion streams overall, 25 million views on YouTube, over a million videos on TikTok and is climbing all the international charts: it is currently the most played song on the radio in Europe.

One second after the end of the episode it will start as usual Hot factorconducted by Paula DiBenedetto, one of the most appreciated voices of RTL 102.5, among the media partners of #XF2022, who will lead the space dedicated to the hot comments of judges and competitors. Paola will also be at the helm of theAnte Factorthe appointment that precedes the episodes of the Live Shows (starting at 21.10 on Sky Uno and streaming on NOW) and recounts the emotions live from the backstage.

The 8 unreleased songs, presented in the last episode, are always available on the album X FACTOR MIXTAPE 2022 (Sony Music Italy) available on all digital platforms. A musical journey to learn more about the projects of the competitors competing in this edition.

The X Factor 2022 Live Shows are every Thursday at 21.15 on Sky Uno and streaming on NOW, always available on demand and visible on Sky Go; on the Wednesday following the first on air they are then shown in prime time on TV8.