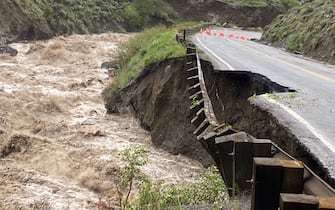 Landslide roads, blocked bridges and piles of debris. Yellowstone National Park in the United States may partially reopen as early as Monday, but damage from floods threatens to hinder the peak of the summer season and is putting a strain on communities that base their economies on visitors.

WATCH THE VIDEO: Climate, record in 2021 for greenhouse gases and ocean levels

An “unprecedented” level of rainfall and the rapid melting of snow in recent days have caused the destruction of bridges, swept away entire sections of roadway and forced the evacuation of over 10,000 tourists

Climate, the Wmo forecast: by 2026 there will be the hottest year ever

Here’s how the climate could cause the next pandemic. I STUDY

The northern region of the park that suffered the greatest brunt of the damage is expected to be closed for a “considerable period of time,” park officials explain, likely until the end of the season, while the less-affected southern portion could open on Monday.

Climate, UN: “We have all the tools against the crisis”

If the reopening of the south ring can bring some relief to some workers in the sector, those facing the north entrance will have to wait a long time

“There’s nobody here,” he told the Cnn Keri Huesing, owner of the Yellowstone Gateway Inn, explaining that all but one tourists have disappeared and a nearby hotel has already closed, sending all the employees home.

In the Montana town of Gardiner (Yellowstone’s northern gateway), hotel managers are already feeling the impact of what happened: “It’s a Yellowstone town that lives and dies from tourism,” said the commissioner. county for parks, Bill Berg

Experts, reports the Cnnpredicted that events such as flash floods this week would occur more often in the Yellowstone area due to rising global temperatures

According to a report on the future of Yellowstone released last year, the climate crisis could lead to more precipitation and rapid melting of snow due to the extreme heat in spring and summer.

The complete report on the future of Yellowstone

The report – compiled by the US Geological Survey, Montana State University and University of Wyoming – found that average temperatures in the Greater Yellowstone Area have risen by 2.3 degrees Fahrenheit since 1950, and could increase by another 5-10 degrees in the coming decades.