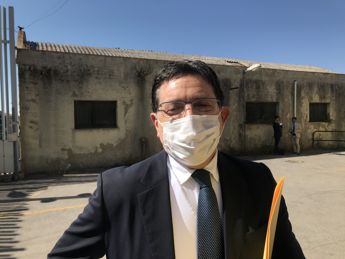 (From the correspondent Elvira Terranova) – The no reiterated in the courtroom by the prosecution and defense was not needed, in the end the President Francesco D’Arrigo decided that the Montante ‘bis’ trial and the ordinary trial of the same line of investigation will be brought together in a single ‘processone’ that sees 30 defendants in the bar in all. Excellent names, from the candidate for the Presidency of the Sicilian Region of the center-right Renato Schifani to the former Sicilian Governor Rosario Crocetta, as well as the former powerful President of the Sicilian industrialists Antonello Montante. The decision came today, after a brief council chamber in the bunker hall of the Malaspina prison in Caltanissetta.


And there are already those who call it the ‘Maxiprocesso di Caltanissetta’ on the ‘Montante System’ which sees politicians, entrepreneurs, police forces, but above all him, Montante, absent today. A decision arrived despite the opposite opinion of the prosecution and defense of the two trials that fear an extension of the times for sentences. But the President of the Court Francesco D’Arrigo went straight: “Given the commonality of sources of evidence and a list of witnesses, and in consideration of the fact that these are connected judgments in which the crime of conspiracy is contested , the meeting does not cause delays but allows for a more rapid execution “, explains the President. Who also pointed out that the decision stems from the observation that “the discussion with different timelines by different colleges that are chaired by the same president would determine incompatibility, and that the rationale of the institute of meeting of processes is also used in order to avoid incompatibility “. So, nothing to do. The calendar of future hearings has also been drawn up. The next hearing is set for September 26th.

In the process bis, in addition to the former anti-mafia champion Antonello Montante, former president of Confindustria Sicilia, the former president of the Region Rosario Crocetta, the former councilors Linda Vancheri and Mariella Lo Bello, the former commissioner Irsap Maria Grazia Brandara, entrepreneurs Giuseppe Catanzaro, Rosario Amarù and Carmelo Turco, Vincenzo Savastano deputy superintendent at the time of the events of the Police at the border office of Fiumicino, Gaetano Scillia head of the Dia center of Caltanissetta from 2010 to 2014, Arturo De Felice, director della Dia from 2012 to 2014, Giuseppe D’Agata, colonel of the carabinieri, and Diego Di Simone Perricone, former head of security of Confindustria. While in the ordinary, the former President of the Senate Renato Schifani is charged, today accused of external complicity in simple criminal association and disclosure of confidential information.

The former director of Aisi Arturo Esposito, the foreman of Aisi Andrea Cavacece, the ” king of supermarkets ” Massimo Romano, the tax attorney Massimo Cuva, the colonel of the carabinieri Giuseppe D’Agata, the trade unionist Maurizio Bernava are also on trial. , the entrepreneurs of the security sector Andrea and Salvatore Calì, Rosetta Cangialosi, Carmela Giardina and Vincenzo Mistretta (three employees of Montante), the policeman Salvatore Graceffa; the manager of Confindustria Carlo La Rotonda; the major of the Guardia di Finanza Ettore Orfanello; the lieutenant Mario Sanfilippo and the colonel of the carabinieri Letterio Romeo. The next hearing will be on September 26th.

The former anti-mafia champion Antonello Montante, according to investigators, would have set up a real ‘system’ of power, conceived and implemented “thanks to a branched network of relationships and complicity interwoven with various characters included at the top of the various sectors of the institutions “. Furthermore, it would have been at the center of a dossier activity carried out, also thanks to excellent complicity, through access to the law enforcement database and aimed at blackmailing “enemies”, influencing political and administrative activities and acquiring information on investigations to his load. Thanks to his contacts and the influence he exercised in some institutional circles, the entrepreneur would have created a sort of spy network: in exchange for favors, members of the police would have given him information on investigations against him, straight on ” enemies “, allowed to have piles of dossiers on influential people. According to the investigators, Montante would have been the head of a sort of “parallel government” in Sicily, and would have “directed” the political and administrative life of the island, placing his men in strategic positions.

“It was ascertained with sufficient clarity – the Nissen prosecutor wrote in the request for arrest – that Montante, in addition to promising and obtaining employment, did his utmost to meet career expectations or transfers of headquarters”. In the shortened trial, on 8 July, the Court of Appeal of Caltanissetta after 8 hours in the Council Chamber had sentenced the former president of Sicindustria, Antonello Montante, to 8 years in prison for criminal association aimed at corruption and abusive access to the computer system.

The court of appeal of Caltanissetta chaired by Andreina Occhipinti (on the sidelines Giovanbattista Tona and Alessandra Giunta) had also sentenced the members of the ” magic circle ” in July: 5 years for Diego Di Simone, the former inspector of the mobile team of Palermo became the head of security of Confindustria. In the first instance he was 6 years and 4 months old. Another conviction also for Marco De Angelis, deputy commissioner of the Palermo police headquarters: 3 years and 3 months, while in the first instance he had been 4. He too would have had a decisive role in the activity of ‘espionage’. Instead, the commissioner Andrea Grassi, who in the first instance had had 1 year and 4 months, was acquitted. The former officer of the Central Police Operations Service had been held responsible for a leak, but the gup had already acquitted him of the heaviest charge, he was not part of the Montante chain of moles. A full acquittal had arrived in the summer. Finally, General Gianfranco Ardizzone, former provincial commander of the Guardia di Finanza of Caltanissetta, was acquitted of two counts. For another charge, relating to the hiring of the daughter, the statute of limitations was triggered. The reasons for the appeal sentence are now awaited.

But today there were also twists. Like the intervention of the prosecutor Maurizio Bonaccorso, who represents the accusation in the ordinary trial. The magistrate spoke of “spies” and the involvement of the secret services and the SCO who would, in fact, “spy” the Prosecutor’s Office during the investigation, in the first part of the investigation, dating back to several years ago. But what did Bonaccorso say? Replying to a lawyer who complained of a “stew” trial because they were divided into different tranches, the prosecutor explained: “As part of the first tranche” of the investigation into the ‘Rising System’, “elements of an equally complex affair emerged. which is the political one. ” “And, since the Caltanissetta Public Prosecutor’s Office operated against the tide, because while it was investigating it was spied on, surrounded by institutional apparatuses, such as the Sco and Aisi, and some senators of the Republic, it was decided to at least put a point on what could already be defined “. A very specific accusation.

Bonaccorso also reiterated the reason for his no to the reunification of the two processes: “There is clear opposition to reuniting the two procedures which are certainly connected, it is evident”. The key defendant, Antonello Montante, should be heard at the next hearing.