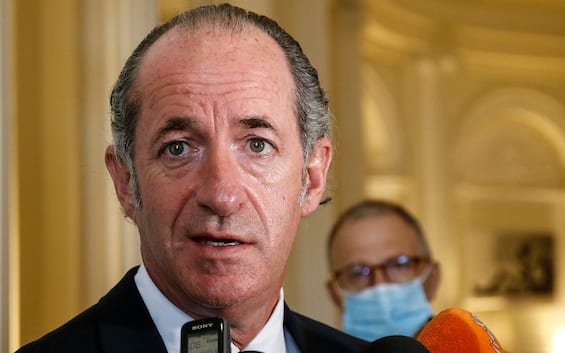 The president of Veneto took advantage of the presentation of his book in Cortina D’Ampezzo to intervene on the latest controversy raised by the senator and microbiologist, Andrea Crisanti, and on the excerpts of wiretaps revealed by Report in the Paduan investigation on rapid swabs. After emphasizing that “they could not be published, he explained that with his collaborators he speaks in dialect and that therefore” tones and modalities are different “from those reported in the newspapers

The president of Veneto, Luca Zaia, attending a meeting in Cortina D’Ampezzo where he presented one of his books, spoke about his interceptions released by Report as part of an investigation into rapid swabs in Veneto, in which the governor would have talked about bringing the microbiologist Andrea Crisanti “to the crash”. The controversy revolves around the phrases addressed by Zaia to the CEO of Azienda Zero, Roberto Toniolo. “I discovered – he explained – that there are four of my phone calls, I wasn’t intercepted, they told me they couldn’t be published, but it doesn’t matter, I’m responsible for what I say, and I confirm it. But the extraordinary thing is that I I speak in Venetian and they are all in Italian”. On his sentences in dialect, he then clarified: “It’s not a joke because the tones and methods are different. Beyond the jokes, I tell my manager that this story that we denounced Crisanti has been going on for a while. It’s not true ” .

Zaia on the pandemic: “I asked the technicians to notify what we were doing”

The president of Veneto then reconstructed the whole story linked to the pandemic, and that he had asked the technicians to “regularly notify the prosecutors of the story of what we were doing, because it’s all a field test, and we had our hands bare I think we sent stacks of cards to the prosecutor’s office”. And he claimed for the umpteenth time that he had decided “alone” the mass rear-end collision in Vo ‘Euganeo, closed in a cordon sanitaire. Crisanti, he specified, intervened later by proposing a study on the “enclave” thus created, with buffers “outgoing”. Zaia then recalls the accusations of “censorship” of the freedom of research, which had raised the protest of the Academic Senate of Padua (COVID, FOLLOW THE UPDATES IN REAL TIME).

“I took weeks of controversy and insults”

“I discover that my parents – he summarized – without confrontation, make a few lines and say ‘it’s not true’, and the controversy disappears. I took weeks of controversy, insults. I was talking not with a hitman but with the general manager of the company Zero, who depends on me, and I ask him why send a letter when we go to the ‘I see’, because – he noted in conclusion – I stay there looking like a liar for weeks”. As for the flawed relationship with Crisanti, Zaia said that “answers, investments have never been denied, and to date, even if I don’t know what happened to the scientific committee for Covid, no one has ever replaced it. It remains a valid professional. But, put yourself in my shoes: the journalists called me telling me that the professor had made my messages public on Whatsapp”.