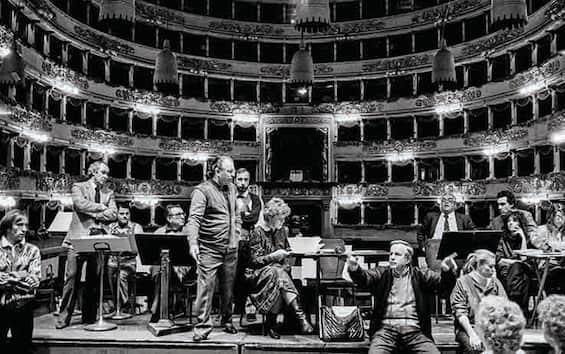 “All the performing arts come together in the work: song, drama, stage, gesture, dance. It is the green meadow of Olympus where the Muses hold hands”. 100 years after the birth of Franco Zeffirelli, the Teatro alla Scala dedicates to the great master the exhibition “Zeffirelli – Gli anni alle Scala”, set up in the rooms of the Theater Museum and open to visitors until 31 August.

“He really changed the way of directing. In the theater the direction is made to be seen from afar and everything is very accentuated, from the make-up to the movements. Zeffirelli removed this somewhat old patina, returning to what was then the desire of Giuseppe Verdi and eliminating the surplus that had stratified over the years. Everything had to be true and believable, even the make-up had to be suitable for close-ups. So, when he resumes the live broadcast of theOthello with Placido Domingo, the character is humanized, he is no longer the stereotype of the hero, of the leader ”, curator Vittoria Crespi Morbio explains to Sky Tg24.

Sketches, photographs and costumes retrace Zeffirelli’s Scaligero path in the setting by Valentina Bellavia with graphics by Emilio Fioravanti. From the beginning, with the costumes for The Italian in Algiers in 1953 and his directorial debut Cinderellauntil’Aida directed by Riccardo Chailly in 2006. 21 productions in half a century of history with legendary shows such as The Turk in Italy with Maria Callas o La Boheme which will be resumed at La Scala next year.

“I’ve seen sketches I’ve never seen before. it is the work of Zeffirelli’s golden years ”observes to Sky Tg24 Pippo Zeffirelli, adopted son of the great director and president of the Zeffirelli Foundation after having visited the exhibition. And he adds: “He had a truly extraordinary relationship with La Scala. La Scala represented for him the beginning of a brilliant career ”.

“Alla Scala has left a living mark on the history and identity of the theater itself; his shows are still in everyone’s hearts and minds “underlines the superintendent Dominique Meyer.

Humanity on stage and behind the scenes

An exhibition journey, also enriched by a documentary made by Francesca Molteni with the editorial curator of Mattia Palma, also curator of the catalog, to tell to tell the greatness of an artist who was able to bring the work to everyone. Also on TV, with the first live broadcast of Othello. And that he managed to make the theatricality of singing dialogue with a more cinematic realism, giving concreteness and humanity to the characters. “The greatness of Zeffirelli – explains the musical director of La Scala Riccardo Chailly – was to understand the profoundly human meaning of all the characters he represented in his career, from cinema to theater to opera. his characters touched the audience that followed him for decades and still continues to move today “.

A humanity that was breathed even behind the scenes.

“Both on the film set and in the theater he respected the workers” recalls Pippo Zeffirelli.

“From children to extras to choristers, Zeffirelli called everyone by their own name. Everyone was so psychologically protagonist of this great adventure that it also became human. It was a large extended family. he is the most loved director in the history of La Scala ”adds Vittoria Crespo Morbio.

Zeffirelli at the Scala

Born in February 1923, Zeffirelli took his first steps in the Milanese theater as an assistant to Luchino Visconti, and then signed 21 shows as costume designer and director, the last one beingAida which inaugurated the opera season on 7 December 2006 under the direction of Riccardo Chailly. He made his debut designing the costumes for The Italian in Algiers with the direction of Corrado Pavolini on 4 March 1953, the following year the first direction came with Cinderella directed by Carlo Maria Giulini, while it is from 1955 The Turk in Italy with Maria Callas. His first inauguration was broadcast on television, with theOthello directed by Carlos Kleiber on 7 December 1976, his la Rustic cavalry in theater and film, i clowns in a contemporary suburb, the Turandot fairytale and heavenly with Maazel, the monumental Don Carlo with Muti. And then Traviata, Aida (in several settings, the first in 1963 with the Second Empire style sets by Lila de Nobili), A masked ball. The show that perhaps binds Zeffirelli the most to La Scala and to the history of music is La Boheme conducted by Herbert von Karajan with Mirella Freni and Gianni Raimondi which was staged for the first time on January 31, 1963, and since then resumed 24 times with stellar singers, such as Luciano Pavarotti in José Carreras and great conductors by Carlos Kleiber, Georges Pretre, in Gianandrea Gavazzeni up to Gustavo Dudamel. A story not yet over. The first woman to direct this version will be the Korean Eun Sun Kim, in the twenty-fifth shoot that is scheduled for March 4th, exactly sixty years after Zeffirelli’s Scala debut.

What is certain is that “at La Scala – he left a living mark in the history and identity of the theater itself; his shows are still in everyone’s heart and mind”, concluded superintendent Dominique Meyer.