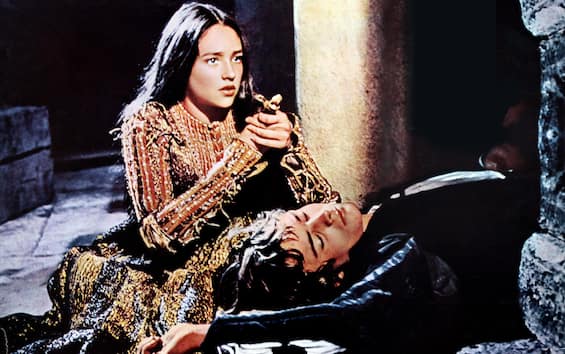 Olivia Hussey and Leonard Whiting, respectively the American actress and actor who starred in the film Romeo and Juliet directed by Franco Zeffirelli, sued Paramount Pictures for more than $500 million over a nude scene in the film shot when they were minors.

At the material time, the two interpreters were respectively 15 and 16 years old (now they are 71 and 72). On December 30, 2022, they filed a lawsuit in Los Angeles County Superior Court alleging sexual abuse, sexual harassment, and fraud.
According to Olivia Hussey and Leonard Whiting, only on the morning of the shooting of the scene in the bedroom, the director Franco Zeffirelli (who died in 2019) would have communicated to them that they would only wear make-up on the body. He would have assured him that the camera would be positioned and moved in such a way as not to show any kind of nudity in the shots.

Today the protagonists of the Italian filmmaker’s film claim that at the beginning Zeffirelli would have assured them that in the love scene they would have worn flesh-colored undergarments, to simulate nudity. Only on the morning of filming – again according to the accusers – did the director reveal to him that they would only have make-up on his body, and not the initially promised undergarments.
The lawsuit, filed in Los Angeles County Superior Court, reports that Franco Zeffirelli convinced the two actors to perform without underwear arguing that otherwise the film would have been a fiasco, with the consequence that their careers would have followed the same fate of the film.

The US magazine variety writes that the lawsuit “is based in part on a California law that temporarily suspended the statute of limitations for previous child sexual abuse claims. Courts have seen an influx of lawsuits against the Boy Scouts of America and the Catholic Church, among other organizations, in the days leading up to the Dec. 31 deadline.” The lawsuit by Olivia Hussey and Leonard Whiting was filed on December 30, the day before the expiry of the law that in California had temporarily suspended the statute of limitations for compensation claims with respect to old cases of sexual abuse of minors.
Paramount, contacted by variety for a comment, has not yet responded.

In a 2018 interview with variety, actress Olivia Hussey had defended the nude scene. “Nobody my age had ever done it before,” she claimed at the time, adding that Zeffirelli shot it with gusto. “It was necessary for the film,” she added five years ago.

In another 2018 interview with Fox Newsthe actress said the scene was “taboo” in America, but that nudity was already common in European films at the time.

The lawsuit reveals that Olivia Hussey and Leonard Whiting have suffered from emotional damage and problems of anxiety, mental anguish and discomfort in the 55 years since the film’s release, losing many job opportunities for these reasons. Despite their performances in Romeo and Juliet were a big hit, Hussey and Whiting had only very limited acting careers after that film. For this reason, they are now seeking compensation for damages “believed to exceed 500 million dollars”, reads the US magazine variety.

The movie was a hit

Romeo and Juliet by Zeffirelli was a box office success, critically acclaimed and nominated for four Academy Awards, but even at the time it had caused controversy, and precisely concerning the bedroom scene which included images of Romeo’s buttocks and Juliet’s bare breasts .

Romeo and Juliet, currently available on Prime Video, is based on the famous work of the same name by William Shakespeare. Thanks to his work of adaptation of the Shakespearean tragedy, Franco Zeffirelli was one of the very few Italian artists to receive the title of Sir from Queen Elizabeth.

The film grossed nearly 40 million dollars in the United States alone, but since its release there have been many controversies due to the nude scene between underage protagonists.
In the United States the film obtained an A rating (film for adults) while in Italy Zeffirelli had to obtain special permission from the censorship.

Absurdly, the protagonist herself (Olivia Hussey-Juliet) was forbidden to watch the film as it was classified as an A rating. The ban was related precisely to the scene she played, which is why the actress at the time commented with irony on the fact that the prevented from looking at something I “see in the mirror every day”.

“Hussey and Whiting have filed a lawsuit in Santa Monica Superior Court, accusing Paramount of sexually exploiting them and distributing nude images of teenage boys,” writes Gene Maddaus in the US magazine variety. According to the complaint, Zeffirelli showed them where the camera would be placed and assured them that no nudity would be photographed or released in the film. The lawsuit alleges that he was dishonest and that Whiting and Hussey were actually filmed naked without their knowledge.

The words of the manager of the two actors

“What they were told and what happened are two different things,” says Tony Marinozzi, the manager of both actors. “They trusted Franco (Zeffirelli). At 16, as actors, they decided it wasn’t going to violate the trust they had. Franco was their friend, and frankly, at 16, what do they do? There are no options. There was no #MeToo”, these are the words of the manager of the actors, reported by variety.

The words of the lawyer of the two actors

“Nude images of minors are illegal and should not be exhibited,” the actors’ lawyer Solomon Gresen said in an interview. “They were very young, naive kids in the 60s who had no understanding of what was coming to them. Suddenly they became famous on a level they never expected, and also they were violated in a way they didn’t know how to deal with,” adds the lawyer.