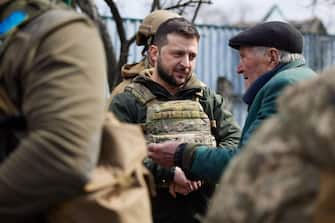 On Monday 4 April, Ukrainian President Zelensky went to Bucha, the village north of Kiev freed by the Russians a few days ago

ZELENSKY IN BUCHA: THE VISIT VIDEO AND ITS WORDS

In Bucha there was a “genocide” perpetrated by Russian forces, said the Ukrainian president, Volodymyr Zelensky, during his visit to the town on the outskirts of Kiev, where Ukrainian forces found dozens of corpses after the Russian retreat.

“These are war crimes and will be recognized by the world as genocide,” Zelensky said

“We know that thousands of people have been killed and tortured with amputations, that women have been raped and that children have been murdered,” Zelensky told reporters, accompanied by some soldiers. “It is genocide,” added the Ukrainian president

The Ukrainian army found in Bucha a torture chamber used by Russian soldiers with the corpses of five civilians bent forward and their hands tied behind their backs. Zelensky accused the Russian soldiers of being “butchers”, the same word used in recent days by Joe Biden

However, Zelensky explained that the negotiations will not stop. Asked by the BBC if it was still possible to discuss peace with Russia, he replied: “Yes, because Ukraine must have peace. We are in Europe in the 21st century. We will continue both diplomatic and military efforts.”

The Ukrainian Foreign Minister, Dmytro Kuleba, also spoke during the day. The brutality attributed to the Russian forces in Bucha, on the outskirts of Kiev, are only “the tip of the iceberg”, in Mariupol the situation is even “worse”, he said in a joint press point with his British colleague Liz Truss, met at Warsaw together with the head of Polish diplomacy, Zbigniew Rau

Meanwhile, Russia continues to deny. The images of civilians killed in the Ukrainian city of Bucha “are a staging” staged by the Ukrainians “after the withdrawal of Russian troops on March 30”. This was stated by the Russian Foreign Minister, Serghei Lavrov, at a press conference at the end of the summit with colleagues from the Arab League

According to Lavrov, the footage is a “provocation” and no citizen of Bucha has been subjected to violence by the Russian military. Lavrov announced that Russian officials will present material in support of Moscow’s thesis in a special press conference in New York in the next few hours, with the aim of “dissolving” what he calls “falsehoods”

Meanwhile, tomorrow, Tuesday 5 April, the Bucha case will end up on the table of the UN Security Council