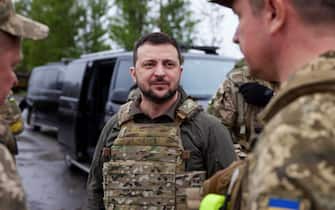 On Sunday 29 May, Ukrainian President Volodymyr Zelensky went to the Kharkiv region to meet some of the troops who are trying to repel the Russian invasion. It was reportedly the first public appearance of the leader outside the Kiev region since the war broke out.

WATCH THE VIDEO: Zelensky: recognizing Russia as a terrorist state

In a note, we read that during his visit Zelensky was informed about the operational situation in the territory, made an inspection of the area and handed over to the military some honors

Zelensky congratulated the troops in person, and even thanked them on Facebook. In a post he wrote: “I have boundless pride in i our defenders. Every day, risking their lives, they fight for freedom for Ukraine. Thanks to each of you for your service! ”

The Ukrainian president then committed himself to the reconstruction front. “2229 houses destroyed in Kharkiv and the region. We will restore everything, we will rebuild it, it we will fill with life. In Kharkiv and all other towns and villages where the evil has come“he wrote on Telegram

Zelensky’s visit came at a very difficult time for the country. After weeks of hardship, it seems that theRussian army is managing to prevail in the Luhansk region and the city of Severodonetsk is subjected to constant bombing. “The conditions in the Donbass they are indescribably difficult “, said the Ukrainian president, who in recent days has returned to ask the West to send new and powerful weapons

However, Moscow is not sparing Kharkiv either. According to what is learned, there would have been some explosions in the city even today. The attacks would have occurred hours after Zelensky’s official visit who, according to his cabinet chief Andriy Yermak, would have made a stop here too

Yermak also reported that at the moment the 31% of the Kharkiv region is occupied by the Russians while another 5%, which had come under the control of Moscow, returned to Kiev

The news that Zelensky has also emerged during the day liquidated the head of the Ukrainian security service in the Kharkiv region, Roman Dudin, sacked “because from the early days of the large-scale invasion, instead of working for the defense of the city he looked after his own interests. What are the reasons, the police will find out”, he says Zelensky in a video

According to Mykhaylo Podolyak, advisor to the Ukrainian president, that in Ukraine “is not a local conflict” and “allowing Russia to win means opening a Pandora’s box and bringing humanity back, in dark times. Any autocrat would be capable of causing conflict. territorial, conquer states and exterminate nations Stopping Russia is one mission of all civilized countries. There is time, but we should hurry ”

Meanwhile, talks by various Western leaders continue with both the Ukrainian and Russian presidents, Vladimir Putin. In the last few hours, Turkish leader Recep Tayyip Erdogan (pictured) announced that he would like to hear from both on Monday 30 May